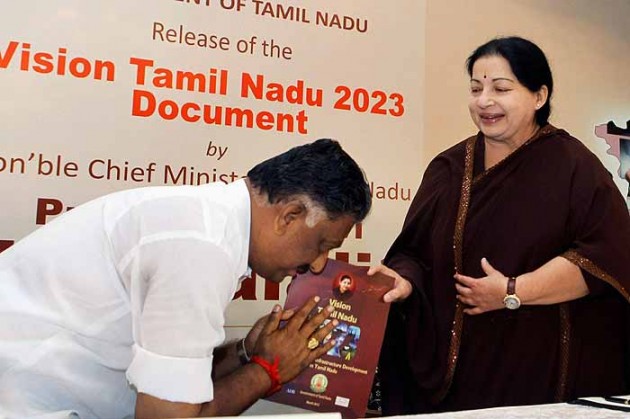 Paneerselvam, a tea vendor turned politician who was a trusted lieutenant and staunch loyalist of Jayalalithaa, has become the chief minister of Tamil Nadu for the third time.

The 65-year-old ran the chief minister’s office twice after Jayalalithaa was convicted in graft cases, and now he faces the challenge of keeping the AIADMK together as it tries to reinvent itself without the charismatic party supremo.

A grim-faced Panneerselvam, who was also seen sporting a beard, was sworn in around 1.15 AMearly today by Governor Ch Vidyasagar Rao at the Raj Bhavan here amidst a pall of gloom, shortly after Jayalalithaa's death. Panneerselvam took oath as CM with a photo of Jayalalithaa in his pocket.

Panneerselvam has prostrated before Jayalalithaa, deified her and wept for her. He also meticulously followed her orders, coordinated with bureaucrats and proved himself a mature leader and team player--qualities that worked for the unassuming Theni chieftain when he was made caretaker CM twice--in September 2011 and again in Septmber 2014.

He belongs to the dominant Mudukulathor community and has risen from humble origins, having run a tea stall at his home town Periyakulam which is still being operated by his family.

A first-time Minister in 2001 after his election to the Assembly, he was vested with the key Revenue department by Jayalalithaa, indicating her confidence in him.

In 2011, in a further endorsement of her trust, Jayalalithaa allocated the major departments of Finance and PWD to Panneerselvam.

Even when in the Opposition, Panneerselvam was the 'No.2', (Deputy Leader of AIADMK Legislature party) from 2001-06 and he was considered Jayalalithaa's trusted lieutenant in the party rankings.

Panneerselvam always came across as an affable man and enjoyed respect, cutting across party lines.

As Leader of the House since 2011, except for a brief period when Jayalalithaa was convicted in a graft case and him being elevated as Chief Minister, Panneerselvam often handled House proceedings with deft ease, especially explaining the state's position on financial matters as Finance Minister.

When Jayalalithaa was convicted in corruption cases in 2011 and 2014, she picked Panneerselvam as her replacement.

As a loyal soldier Panneerselvam duly gave back the reins of power to Jayalalithaa when courts acquitted her in both the cases.

On October 12, OPS was again given charge of Jayalalithaa's portfolios, including Home and Police, besides the task of presiding over Cabinet meetings, days after the AIADMK chief was admitted to Apollo Hospital.

Panneerselvam retained all of the portfolios held by Jayalalithaa, including Home and Police.