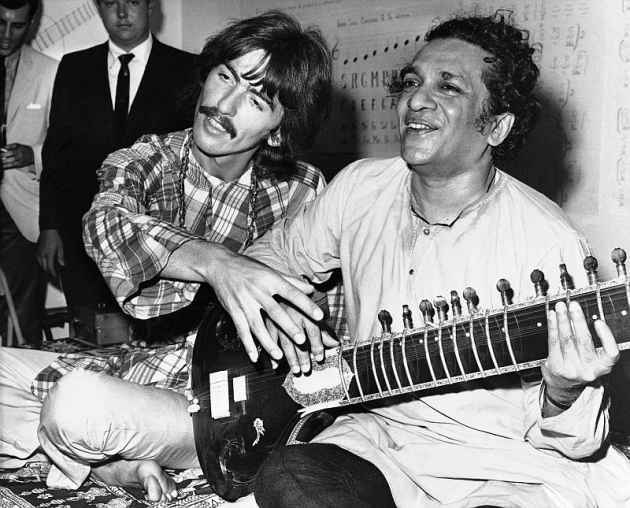 Through his influence on his great friend and Beatles legend George Harrison, and appearances at the Monterey and Woodstock festivals and the Concert for Bangladesh, he became a household name in the West, the first Indian musician to do so.

Shankar authored violin-sitar compositions for Menuhin and himself, music for flute virtuoso Jean Pierre Rampal, music for Hosan Yamamoto, master of the Shakuhachi and Musumi Miyashita - Koto virtuoso, and has collaborated with Phillip Glass (Passages).

Harrison produced and participated in two record albums, "Shankar Family & Friends" and "Festival of India" both composed by Shankar.

Harrison became interested in Indian classical music, bought a sitar and used it to record the song "Norwegia Wood (This Bird Has Flown)"

Harrison met Shankar in London in 1966 and visited India for six weeks to study sitar under Shankar in Srinagar. Shankar's association with Harrison greatly increased Shankar's popularity and Ken Hunt of AllMusic would state that Shankar had become "the most famous Indian musician on the planet" by 1966.

In 1967, he won a Grammy Award for Best Chamber Music Performance for West Meets East, a collaboration with Yehudi Menuhin. The same year, the Beatles won the Grammy Award for Album of the Year for 'Sgt. Pepper's Lonely Hearts Club Band' which included,"Within You Without You" by Harrison, a song that was influenced by Indian classical music.

Many of Harrison's songs have Indian musical influences and the sitar was used in three Beatles albums - 'Rubber Soul', 'Revolver'.

In August 1971, Shankar also participated in the charity concert for Bangladesh organized by George Harrison.

Shankar underwent an angioplasty in 1992 due to heart problems, after which George Harrison involved himself in several of Shankar's projects. Harrison also was the editor of Shankar's (second) autobiography Raga Mala.

"Ravi was the first person who did not try to impress me but in turn I was impressed by him," Beatles legend George Harrison had said about his first meeting with Sitar maestro Ravi Shankar in Martin Scorsese's documentary George Harrison: Living In the Material World.

"His meeting with Ravi was not just between two individuals but of two cultures. It was a great cultural exchange," Olivia Harrison, wife of the late Beatle, said at the screening of the film last year.

The documentary on Harrison also included rare footage of other musicians including Ravi Shankar.

"I think India influenced his music a lot. He was very fond of Indian classical music and instruments like sitar, sarangi, tabla and veena," Oilivia added.

The maestro not only taught Harrison about music but also had a strong influence on his spiritual life.