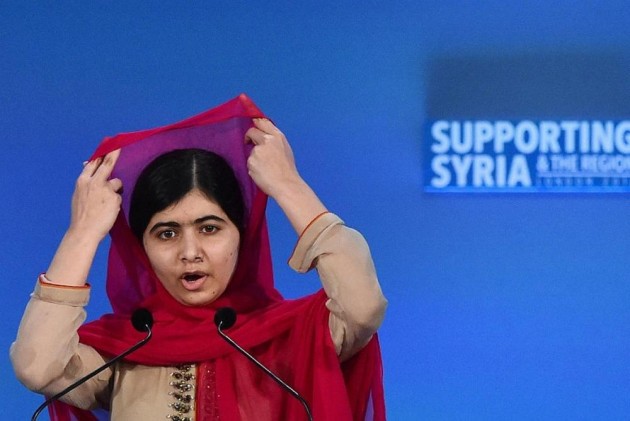 Anguished by the lynching of a Pakistani student for alleged blasphemy, Nobel Laureate Malala Yousafzai today said Pakistanis themselves are responsible for tarnishing the image of Islam and the country.

Mashal Khan, who studied journalism at the Abdukl Wali Khan University in Khyber Pakhtunkhwa, was mercilessly beaten and then shot dead by a vigilante mob of students from the same varsity, suspecting him of publishing blasphemous content online and promoting the Ahmadi faith, police said.

The 19-year-old UK-based Pakistani education activist, in a video message said, "today I got the news of Mashal Khan's death. This incident is full of terror and violence. I have spoken to his father who gave the message of peace and patience. I appreciate and salute his message of patience and peace".

Malala, who shared the 2014 Nobel Peace Prize with India's child rights' activist Kailash Satyarthi said, it is the right of every Pakistani to be safe and lead a normal life.

"If we continue to kill one another in such a manner, no one will be safe," she said, referring to the lynching of Khan who, after being assaulted by a large group of students, appeared to have succumbed to a gunshot wound.

"So my message to everyone is, please know your religion, culture, values which have always taught us to be patient and preach peace. In the end, I would request all the political parties, leaders and government to stand for peace and justice. Stand for the justice to Mashal Khan's family and do not be silent," Malala added.

Continue FREE with Ads Pay Rs. 1 to Read Without Ads
READ MORE IN:
Malala Yousafzai International
Next Story : Petrol Price Hiked By Rs 1.39 Per Litre, Diesel By Rs 1.04 For A Litre
Download the Outlook ​Magazines App. Six magazines, wherever you go! Play Store and App Store