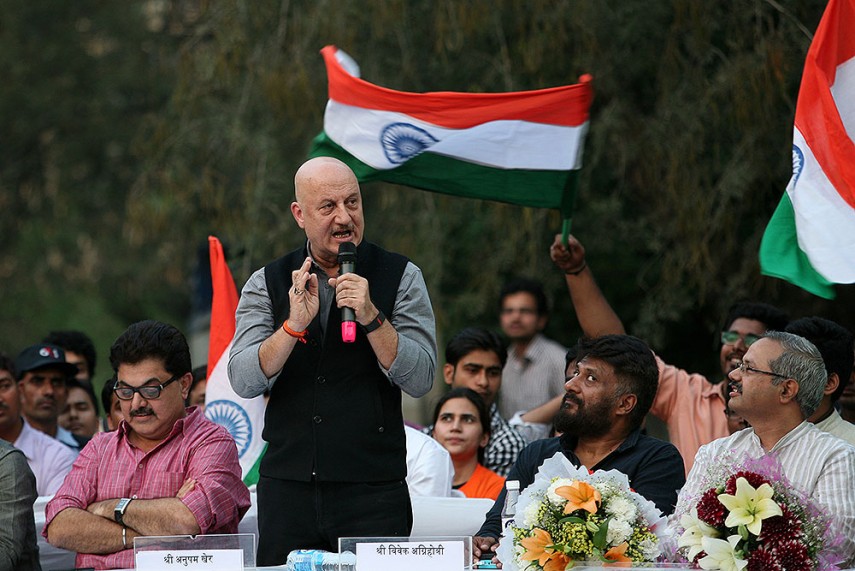 Veteran actor Anupam Kher today said that while he believes art has no boundaries, it is the moral responsibility of Pakistani actors working in India to publicly condemn the Uri attack.

When asked about whether it was right to ban Pakistani artistes from working in Indian films, Kher said, "I believe art and culture should not have boundaries but it is important and the moral responsibility of Pakistani actors working here to condemn the terrorist attack, which killed our soldiers."

The actor said even he had condemned the Peshawar school attack and does not see any harm in Pakistani artistes doing the same now.

"I am not saying condemn your country because that's very difficult for you as you are living there and politically it may not be the correct move. We welcome them, give them platform and places, they become popular and earn money, and they deserve that. But it is important to be sensitive to the sensitivity of Indian people.

"It is important to say, 'I condemn the unfortunate massacre of Indian soldiers'. It is important to speak about such things. So, I am against that they do not do that. They need to do that because we do that. We have always shown our goodness, friendship..."

The 61-year-old actor was in the city to attend the launch of a new line-up of shows on Zindagi channel, which originally aired a host of Pakistani shows. Kher has produced one of the upcoming shows on the channel.

Kher said he has met some "really nice" Pakistanis but he is biased when it comes to India.

"There are some really nice people in Pakistan, they are great hosts. I once went to Karachi and the experience was beautiful. But when it comes to my country and jawans, I cannot be diplomatic.

"I am biased towards my country because whatever I am today is because I am an Indian. What will I tell the mother of that jawan? That let's give art and culture more importance? That's not possible."

For Zindagi, Kher has produced Khwaabon Ki Zamin Par, which is about the journey of an aspiring actor to stardom. Also present at the launch was Zee chairman Subhash

Chandra, who called the decision to discontinue Pakistani shows on Zindagi unfortunate but unavoidable.

"This was an unfortunate decision that we had to take. Love cannot be one-sided. When we started Zindagi I promised Nawaz Sharif that I will show your programmes here. We showed those shows, Pakistani actors became a part of our living rooms," Chandra said.

Zindagi showcased popular Pakistani dramas like "Humsafar", "Zindagi Gulzar Hai", "Maat" and "Dastaan", which helped Fawad, Mahira and other actors from the neighbouring country to gain popularity in India.

Chandra said he requested these stars to condemn the Uri attack but they did not oblige.

"Around nine actors (from Pakistan) are working in Bollywood. Six out of these are stars courtesy Zindagi. Fawad, Mahira, Atif Aslam, Ali Zafar, Rahat Fateh Ali Khan, Veena Malik, Imraan Abbas, Misha Shafi, Shafqat Amanat Ali. We called all of them and requested them to condemn terrorist attack.

"Nobody did that. We said don't even take Pakistan's name but they are not ready to do that. So, what will we do?" he said.