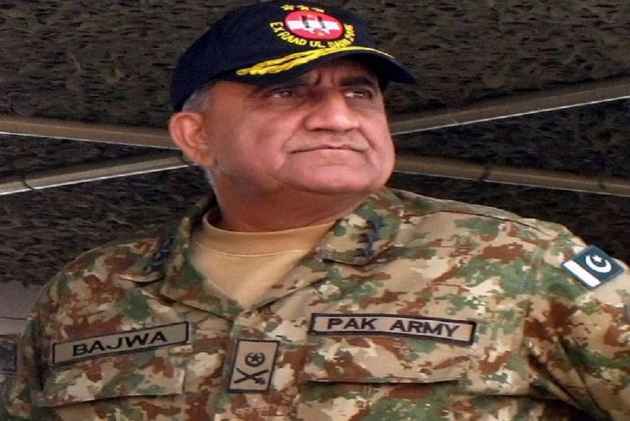 Pakistan is "indebted" to its all-weather ally China for its "unflinching support" to it on the Kashmir issue, the expansion of the Nuclear Suppliers Group and the Shanghai Cooperation Organisation, army chief general Qamar Javed Bajwa has said.

Describing China and Pakistan as "important strategic players in the region," Gen Bajwa, who was the chief guest at a reception in Rawalpindi on Tuesday hosted by the Chinese embassy, said, their bilateral ties have jointly benefitted both the countries.

"It is a relationship based on mutual trust, respect, understanding and cooperation. In fact, this friendship is flourishing with every passing day, which encompasses every aspect of our life," he said at a function to celebrate the 90th anniversary of the founding of China's People's Liberation Army (PLA).

Gen Bajwa said the "professional collaboration between PLA and Pakistan Army, will continue to expand to bring peace to the region in general and China - Pakistan in particular."

Calling the 2.3-million-strong PLA, the world's largest standing army, as "one of the finest military outfits in the world," he said the Pakistan Army and the people of Pakistan take great pride in "our deep rooted brotherly relationship" with China.

He noted that both China and Pakistan are faced with similar challenges and opportunities. Both countries have assumed shared responsibility towards stability in the region and prosperity of their people, he said.

"This unity of purpose has led to the consolidation and has strengthened our resolve as determined nations, to brave all challenges and storms together," he was quoted as saying in a press release issued by the Inter Services Public Relations, the media wing of the Pakistan Army.

The Pakistan Army chief also pointed out that China and his country has expanded their cooperation to wider areas have launched strategic initiatives like the China-Pakistan Economic Corridor, defence collaboration in numerous joint projects and united diplomatic front, internationally.

"Pakistan is indebted to China for its unflinching support to our perspective at all international forums, may it be expansion of Nuclear Suppliers Group, Kashmir Issue, or Pakistan's full membership of the Shanghai Cooperation Organisation," Gen. Bajwa said.

While China is blocking India's membership bid in the NSG as New Delhi is not a signatory to the Nuclear Non- Proliferation Treaty, Beijing is apparently seeking equal treatment to its ally Pakistan in the elite nuclear trading group. China, however, backed both India and Pakistan to become full members of the Beijing-based SCO.

China has also been blocking India's move to get Pakistan-based Jaish-e-Mohammed chief Masood Azhar sanctioned by the UN Security Council.

"We are also actively cooperating in all fields against war on terror. Moreover, from diplomatic cooperation to security collaboration, we have stood by each other through thick and thin and shall continue to stand shoulder to shoulder, come rain or shine," he added.