Pakistan: At Least 13 Killed After Blast In Quetta 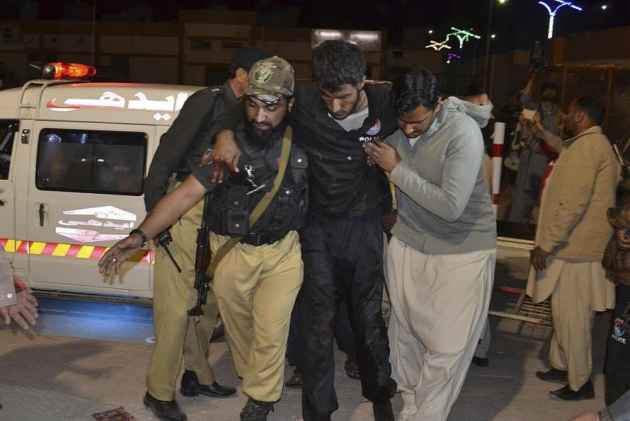 A suicide bomber blew up his explosive-laden car near the office of the regional police chief in Pakistan's restive Balochistan province today, killing at least 13 people, including six policemen, and injuring 20 others.

The bodies were shifted to the Civil Hospital after the attack, according to hospital officials. Of the injured, nine are said to be policemen.

Balochistan government spokesperson Anwarul Haq Kakar told Geo News that the suspected bomber in the car tried to break a security perimetre to target the police offices but blew up after policemen standing guard attempted to stop him.

No one claimed responsibility for the attack, but Kakar blamed India for the blast.

Balochistan has also been facing insurgency by Baloch nationalists and Islamist militants.

Security officials also confirmed that the blast was the result of a vehicle-borne improvised explosive device which exploded after the "suspicious" driver was spotted by policemen.

DIG Quetta Abdul Razzaq Cheema, addressing the media, said they are examining CCTV footage to determine the details of the incident.

Security forces cordoned off the site of the blast and began investigating after rescue services shifted the injured and deceased to the hospital.

Officials said body parts of the suspected bomber, strewn across the site of the blast, were being collected along with other evidence for forensic examination.

An initial investigation report by Civil Defence Director Aslam Tareen revealed that 75 kilogrammes of explosives were used in the blast.

Footage of the incident showed two vehicles badly damaged in the explosion, while debris lay scattered on the street.

Officials said the explosion was loud enough to be heard from a distance and shattered windows of nearby buildings.

Earlier this year, on February 13, a blast took place near the Saryab Bridge in Quetta killing two personnel of the bomb disposal squad and leaving 11 injured.

Later in March, an explosion targeting a security forces convoy occurred on Saryab Road. Four people were injured including three Frontier Corps personnel and a passer-by.

In August, last year, a suicide bomber targeted the emergency services ward at Civil Hospital, following the death of the president of the Balochistan High Court Bar Association, killing at least 70 people and leaving many wounded.

Continue FREE with Ads Pay Rs. 1 to Read Without Ads
READ MORE IN:
International
Next Story : 'Pakistan Has American Blood On Its Hands': Bill Tabled In US House To Revoke Pak's Ally Status
Download the Outlook ​Magazines App. Six magazines, wherever you go! Play Store and App Store