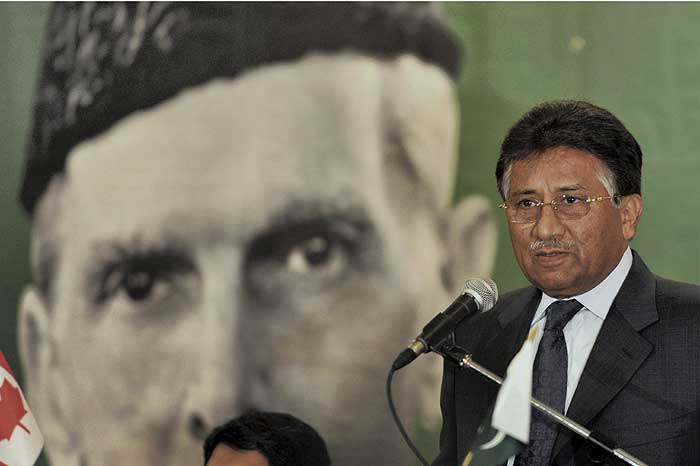 A Pakistani man, who had filed a petition to stop former dictator Pervez Musharraf from leaving Pakistan, has been slapped a fine of Rs 10,000 by the High Court here which said the plea was for cheap publicity.

Lahore High Court Justice Syed Mansoor Ali Shah took up Syed Iqtidar Haider's application yesterday and asked the applicant to apprise the court as to how implementation of the Constitution could be sought through a civil miscellaneous application.

Haider, who also holds the US nationality, filed a civil miscellaneous application in a pending main petition on Thursday, a day before 72-year-old Musharraf left for Dubai.

The petition sought stopping Musharraf from going abroad and deletion of his name from the Exit Control List (ECL).

The applicant failed to give a satisfactory answer to the court's query.

Justice Shah observed that the applicant used to file petitions against different personalities for cheap publicity only.

He said the court would not encourage such frivolous and unnecessary litigation.

The judge dismissed the application and imposed a fine of Rs 10,000 on him.

The petitioner had pleaded before the LHC that Gen Musharraf is facing a treason case under Article 6 of the Constitution for clamping emergency in the country on November 3, 2007, and being a 'suspected traitor' he should not be allowed to leave the Pakistan (on the pretext of getting medical treatment).

He asked the court to intervene alleging that the Nawaz Sharif-led government has struck a deal with Musharraf, and therefore, is not going to stop him from proceeding abroad.

He requested the court to place Musharraf on the ECL again and to stop the former ruler from leaving country till the court decision in the treason case against him.

On March 16, a five-member bench of Supreme Court headed by Chief Justice of Pakistan Anwar Zaheer Jamali while hearing a pending federal government appeal against a 2014 Sindh High Court order removing Musharraf's name from the ECL, upheld the ruling.

Following the court decision, the federal government deleted the name of Musharraf and allowed him to go abroad for his treatment.

Musharraf is said to have had fractured his vertebra.

He has reached Dubai from where he will leave for the United States for his medical treatment.

"After undergoing the treatment in the US, I will return to Pakistan. I will love my country and I am afraid of facing courts in fake cases against me," Musharraf said after reaching Dubai.