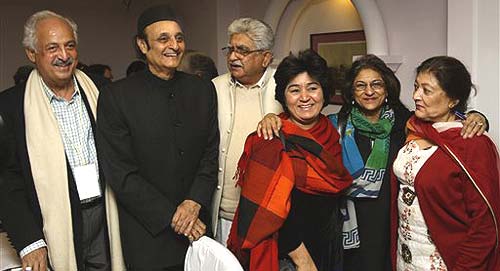 outlookindia.com
-0001-11-30T00:00:00+0553
Strongly pitching for good Indo-Pak relations, a Pakistani delegation has said that the Zardari government was for peace and there should not be any hesitation on its part to investigate the Mumbai terror attacks and bring the perpetrators to justice.

"We are committed to peace," a member of the delegation and Chairperson of the Pakistan Human Rights Commission, Asma Jehangir, said at a press conference.

Asserting that the peace process should be restored, journalist Imtiaz Alam said, "We are of the firm view that the two governments must cooperate to bring to justice the perpetrators of crime committed against humanity in Mumbai and there should not be any hesitation on the part of the Pakistani government to do the investigations and the subsequent trials."

He said terrorism has turned into a "big monster" and the main centre of it is in Afghanistan and Pakistan's North West Frontier Region (NWFP).

"That (terror) is overflowing towards India and the rest of the region. It may have gone out of control of the Pakistani state in some areas and there need to be regional approach and oneness of cooperation to tackle it," Alam said adding that the Joint Anti-Terror Mechanism should be strengthened.

National Executive Committee member, Haji Mohammad Adeel said, "Mumbai attacks need to be condemned. Pakistan also faces such attacks very frequently. The present government after coming to power and with its message of peace with India, gave us hope. But I think 26/11 led to hardship in the relationship between the two neighbours."

Alam said, "We appreciate the voices of peace on many sides. They do not want war. Whether Mumbai or Islamabad, their agony is common and so should be our efforts against terrorism.

Claiming that the purpose of the Mumbai attacks was to bring the two countries to blows and divert attention from the war against terrorism in NWFP, Alam said, "They have, I think, partially succeeded."

On US President Barak Obama's message to Pakistan to perform, he said it is a relationship between the client state and the donor state.

"The donor states tell the client state how to do and what to do. There is nothing abnormal about it and I would urge India to not to be in that position in which Pakistan has been for so long," he said.

Commenting on why Pakistan denied that the lone terrorist in Mumbai attacks Amir Ajmal Kasab was a Pakistani, Alam said parents generally deny such kids.

"I think it was stupid on the part of the decision makers to deny this," he added.

He blamed the media in Mumbai for creating a hype over the involvement of Pakistan in the terror attacks. "The over-active and over-hyped media in Mumbai jumped all conclusions like the great intelligence investigators and reached the bottom of the things."