Pak Court Summons Lakhvi to Appear in Next Hearing 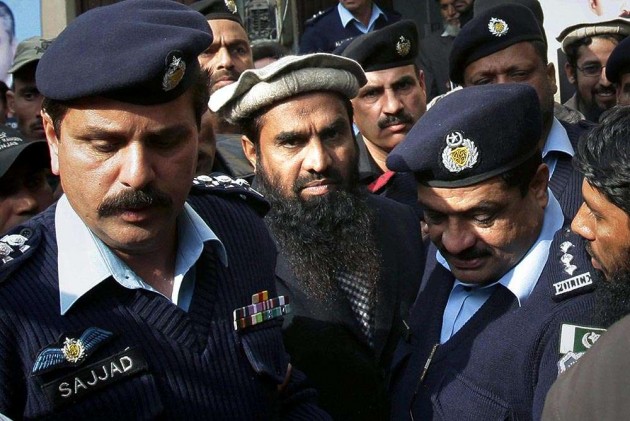 Print
A
A
A
increase text size
Outlook January 06, 2015 16:07 IST Pak Court Summons Lakhvi to Appear in Next Hearing

LeT operations commander Zaki-ur- Rehman Lakhvi, the 2008 Mumbai terror attack mastermind, was today summoned by a Pakistani court to appear before it in the next hearing on the government's appeal against his bail in the 26/11 case.

A two-member bench of the Islamabad High Court headed by Justice Shaukat Siddiqui today admitted the government's plea against the Anti-Terrorism Court's decision to grant bail to Lakhvi.

"The court summoned Lakhvi for arguments in the case on next hearing and issued a notice to him in this regard," Prosecution Chief Chaudhry Azhar told PTI after the hearing.

Azhar, a special prosecutor of Federal Investigation Agency, said the court office would fix the next date of hearing.

The prosecution informed the court in its petition that an Anti-Terrorism Court (ATC) ignored testimony in the 26/11 case while granting bail to Lakhvi.

On December 18, 2014, the ATC granted bail to Lakhvi, who was involved in planning, financing and executing the Mumbai terror attacks in November 2008.

Next day, he was again detained under the Maintenance of Public Order (MPO).

Just before he was to be released, Lakhvi was arrested on charges of kidnapping Afghan national Muhammad Anwar Khan.

The police kept him at the Shalimar Police station here for a two-day physical remand before a magistrate sent him back to Adiala Jail yesterday for a 14-day judicial custody.

Lakhvi has been detained at Adiala Prison for the last five years or so. He will be produced before the magistrate on January 15.

Lakhvi was arrested in December 2008 and was indicted along with the six others on November 25, 2009 in connection with the case. The trial has been underway since 2009.

"The fact remains that such like cases of defunct terrorist organisations are not so easy to be conducted and especially the prosecution in such cases is the most difficult job in our country for the last many years.

"In this case, the learned trial judge (of ATC) after the terrorist attack in Islamabad courts (of March 2013) refused to visit Adiala Jail for a long time due to security reasons.

"Even the prosecutors of this case have been receiving threats through cell phones during the proceedings which were duly conveyed to the concerned authorities. The witnesses are also not secured, and reluctant to depose against the accused persons in the given situation.

"A major part of the evidence has been recorded and the rest will not take more than three months to record and therefore the observation of the ATC’s judge that the trial may take years to conclude is not correct," the prosecution said.

The prosecution further mentioned in their plea that the the trial has not been delayed because of the prosecution but "multiple applications filed by the defence counsel hampered progress of the case."

"The prosecution had moved several applications for an expeditious trial but the trial court did not properly examine these facts," it said.

The appeal further pointed out that the confessional statement of Ajmal Kasab, the lone terrorist arrested by Indian authorities after Mumbai attacks, was still part of the evidence and it was at no stage discarded and that statement clearly established Lakhvi's link to Mumbai attacks.

"The prosecution has sufficient evidence against Lakhvi thereby requesting the court to cancel his bail," it said.