Padma Lakshmi Opens Up About Her Marriage to Rushdie 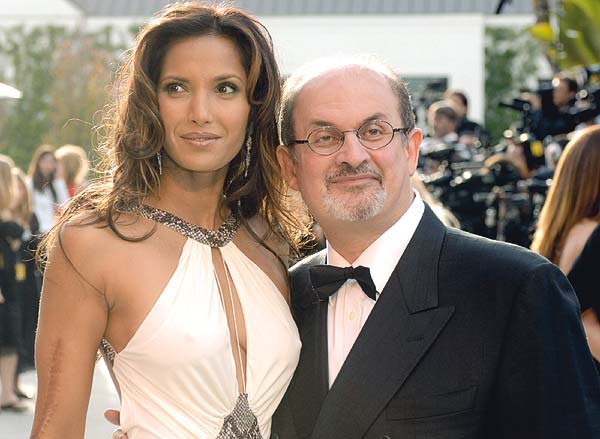 Print
A
A
A
increase text size
Outlook March 07, 2016 20:25 IST Padma Lakshmi Opens Up About Her Marriage to Rushdie

Laxmi, 45, one of the judges on the US television show 'Top Chef', chronicles details of her relationship with the Mumbai-born Booker Prize-winning author in 'Love, Loss and What We Ate'.

"I just wanted my own identity. I was making the transition out of one stage of my life and into another. But in order to do that, it required that I wasn't everywhere that he [Rushdie] needed me to be," she told 'People' magazine.

The pair met in 1999 at a party in New York when Lakshmi was 28 and single and Rushdie was 51 and married to his third wife.

Lakshmi and Rushdie married in 2004, dividing their time between London – where his two sons lived – and New York.

She writes about how at first their marriage was blissful and Rusdie used to make breakfast for her every morning.

But the book then goes on to paint a portrait of a demanding husband in need of constant attention.

Lakshmi claims Rushdie was insensitive to a medical condition and he labelled her a "bad investment".

"It's not that I didn't want to be there for him, but something was very deeply wrong. And I didn't understand it. And that caused a whole lot of misunderstanding," Laxmi said.

She claims that each year when the Nobel Prize went to another writer Rushdie took it very hard and required consolation, The Daily Telegraph reported.

Lakshmi later divorced Rushdie in 2007 and went on to become involved with Ted Forstmann, the billionaire chief executive of sports and artist management company IMG, who died in 2011 aged 71.

She has a six-year-old daughter with venture capitalist Adam Dell.

New York- based Rushdie, 68, has not responded to his ex-wife's claims so far. Shortly after his marriage to Lakshmi ended Rushdie had said, "It's strange, given that I've been married four times, but I actually don't think marriage is necessary".

"Girls like it, especially if they've never been married before – it's the dress. Girls want a wedding, they don't want a marriage. If only you could have weddings without marriages, " Rushdie had said.

Rushdie, who served as President of PEN American Center from 2004 to 2006, became centre of a major controversy after he wrote his controversial fourth novel 'The Satanic Verses' in 1988, provoking protests from Muslims in several countries.

Death threats were made against him, including a fatwa calling for his assassination issued by Ayatollah Khomeini, the Supreme Leader of Iran, on February 14 1989.