Accusing Owaisi brothers of Majlis-e- Ittehadul Muslimeen's (MIM) of "poisoning" the minds of Muslims, Shiv Sena today said the Hyderabad-based outfit would be defeated in the Aurangabad municipal polls the same way it was routed in the recently-held Bandra bypoll.

Elections to Aurangabad and Navi Mumbai municipal corporations are being held today.

"The Owaisi brothers (Asaduddin and Akbaruddin), who were recently in Sambhajinagar (Aurangabad), issued a fatwa to remove the saffron flag from the civic body and replace it with the green one. What else can be expected from them? The green colour of Pakistan's flag has filled up their minds," the Sena said in the editorial of party mouthpiece Saamana.

Calling MIM a "demon" that is looming over Aurangabad, the saffron party said that the Owaisi brothers should not forget that the people of Sambhajinagar would defeat their party just like in Bandra byelection.

"Everybody has seen the way MIM's ideology was defeated in the Bandra bypoll. They keep poisoning the minds of Muslims in Sambhajinagar. But history will repeat itself in today's polls," it said.

"The patriotic Muslims voters will show their strong nationalistic streak by not supporting the Owaisi brothers. This is a good chance to bury the demon and purify the land from its ill-effects," it said.

After all the MIM should not forget that (Mughal emperor) Aurangzeb was buried at the same place (Aurangabad), the party added.

In an apparent jibe at the NCP, Sena said that party strongman Ganesh Naik lost his Belapur seat in last year's state Assembly polls as a result of people's anger and the NCP will meet the same fate in Navi Mumbai municipal election as well. 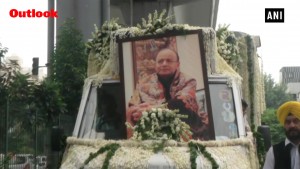