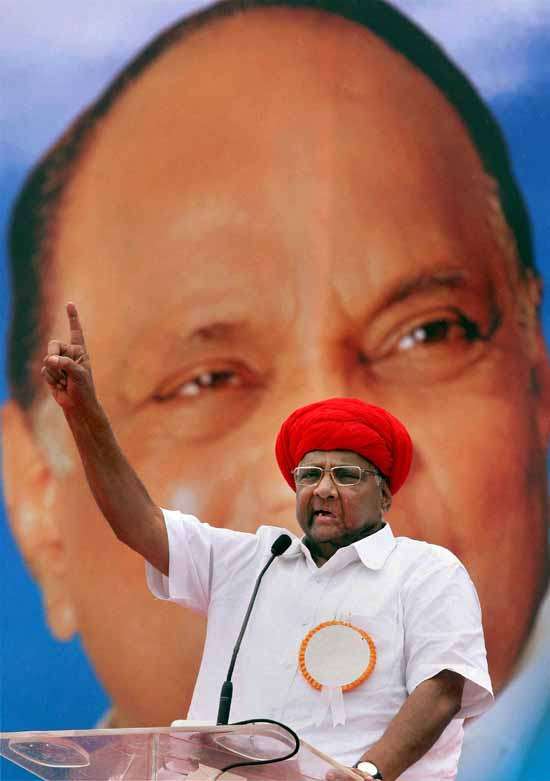 Narendra Modi-led BJP could suffer in the Lok Sabha polls due to "overconfidence" as its campaign is going on the lines of its 2004 "India shining" slogan, NCP chief and Union Agriculture Minister Sharad Pawar said today.

Pawar, a prominent leader in the Congress-led UPA, told PTI that he does not feel that the BJP will come near the magic mark despite the high-profile campaign.

He suggested that the Congress needed to be more pro-active at a time when Modi-led BJP is striving hard to reach out to the masses.

"Congress is the main party of the UPA," he remarked when asked how the UPA should face the challenge posed by the main opposition party and its leader in the polls.

"I am worried about stability," he said when asked whether he visualised that the post-poll scenario will be a repeat of 1996 polls when BJP emerged as the single largest party but its government could last only 13 days.

Dismissing suggestions of a Modi wave, Pawar said that he does not feel that the "one man campaign" has been able to generate a climate favourable for the main opposition and is apprehensive that it is marred by overconfidence.

He suggested that in 2004, the BJP lost despite having a "towering personality" like Atal Bihari Vajpayee as its leader. He said BJP lost its way in the "feel good" and "India shining" talk and failed to realise how Manmohan Singh became Prime Minister.

Scotching speculation that he would like to become a Prime Minister in the case of a hung verdict, he said that his party was contesting a total of 31 seats in the 543-member Lok Sabha, including 21 in Maharashtra. "Is it not irrational politics to think of the moon with such a minuscule strength?" he shot back to a query in this regard.

He steered clear of questions as to how Modi would be as Prime Minister, saying that it is not proper to talk about individuals. He said that he knows Modi for long, but was unsure whether he was Prime Minister material.

"Even prime ministers have not been so lucky with their speeches. The media management is being felt intensely," Pawar remarked.

The NCP leader said he was not sure of the possibility and viability of a non-Congress and non-BJP government at the Centre after polls. He said such an arrangement would be "hotch-potch" and will be brought down by an outside supporter, whether Congress or the BJP, whenever it would suit them politically.

In reply to a question about AAP, the NCP supremo said he was not sure about the possible impact of Arvind Kejriwal's party in the polls.

"One thing is certain that people wearing caps are seen at many places," he added.

Replying to a question, he asserted that he was in the UPA and would continue to remain in the UPA. NCP has become the second largest constituent of the Congress-led UPA after parting of ways by Mamata Banerjee's Trinamool Congress and DMK.

Asked about what role he envisages for himself after the polls, Pawar remarked in lighter vein that after half a century in electoral politics, he has now come to the Rajya Sabha and now would like to take rest in the House of Elders.

However, the minister said that he would be happy to coordinate among various parties in the UPA.