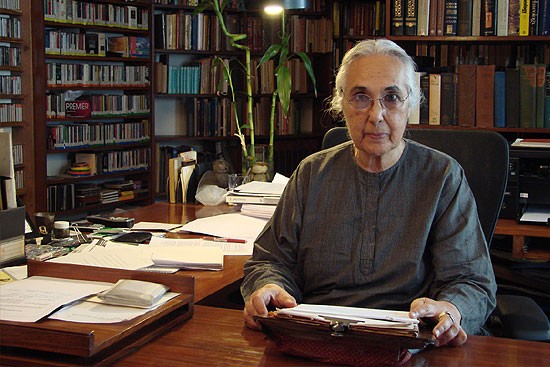 Print
A
A
A
increase text size
Outlook October 29, 2015 15:45 IST Over 50 Leading Historians Speak Out Against 'Highly Vitiated Atmosphere' in Ind

After writers, artists, filmmakers and scientists, over 50 historians today came out strongly against Prime Minister Narendra Modi for not making any reassuring statement following concerns over "highly vitiated atmosphere" prevailing in the country.

A total of 53 historians including leading names like Romila Thapar, Irfan Habib, KN Pannikar and Mridula Mukherjee have in a joint statement released by Sahmat raised their serious concerns over recent developments.

"Differences of opinion are being sought to be settled by using physical violence. Arguments are met not with counter arguments but with bullets," the statement said referring to the Dadri lynching incident and the recent ink attack on Sudheendra Kulkarni during a book launch function in Mumbai.

"When writer after writer is returning their award of recognition in protest, no comment is made about the conditions that caused the protest; instead the ministers call it a paper revolution and advise the writers to stop writing. This is as good as saying that intellectuals will be silenced if they protest," it said.

This was particularly worrying for historians who have already experienced attempts to ban their books and expunge statements of history despite the fact that they were supported by sources and the interpretation is transparent, they said.

"What the regime seems to want is a kind of legislated history, a manufactured image of the past, glorifying certain aspects of it and denigrating others, without any regard for chronology, sources or methods of enquiry that are the building blocks of the edifice of history," the statement said.

The historians expressed concern over the silence of the Prime Minister on the issue. "And when it is hoped that the Head of Government will make a statement about improving the prevailing conditions, he chooses to speak only about general poverty; and it takes the Head of the State to make the required reassuring statement, not once but twice."

The statement urged the state to ensure an atmosphere that is "conducive to free and fearless expression, security for all sections of society and the safe-guarding of the values and traditions of plurality that India had always cherished in the past."

"It is easy to trample them down, but it is important to remember that it will take too long and will be beyond the capacity of those who are currently at the helm of affairs, to rebuild it once it is destroyed," the statement said.

At least 36 writers including leading names like Nayantara Sahgal, Ashok Vajpeyi, Uday Prakash and K Veerabhadrappa had returned their Sahitya Akademi awards, and five writers stepped down from official positions of the literary body, protesting against its "silence" over "rising intolerance".

The Akademi had yielded to the unrelenting protests by calling an emergency meet and issued a strong condemnation of the killing of Kannada writer M M Kalburgi and others while urging litterateurs to take back awards.

Yesterday, agitating students from FTII unilaterally withdrew their 139-day-old strike but vowed to continue protests as ten eminent filmmakers returned their National Awards voicing solidarity with them and against growing intolerance in the country.

Scientists including three Padma Bhushan recipients Ashoke Sen, PM Bhargava and P Balram announced their decision to return their awards. This move comes after two sets of scientists over the past two days petitioned the President urging him to initiate "suitable actions".