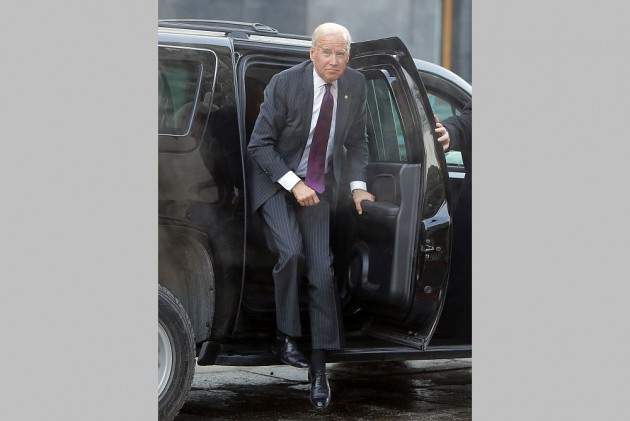 Outgoing US Vice President Joe Biden arrived in Ukraine today to support the war-scarred country's leaders amid concerns that ties could chill under Donald Trump.

Biden's one-day visit to meet President Petro Poroshenko and Prime Minister Volodymyr Groysman was his last to Kiev before leaving office and was aimed at underscoring his personal involvement in providing support for the former Soviet country.

Biden has spearheaded efforts by Barack Obama's outgoing administration to push Ukraine towards reforms as the country struggles with Russia's annexation of Crimea and its support for separatist fighters in the east of the country.

But US president-elect Trump's praise for Russian President Vladimir Putin has raised doubts over whether he will provide further assistance for Kiev.

"I wanted to come here one more time in my last trip as vice president to honour how much progress the people of Ukraine have achieved," Biden told journalists at a briefing alongside Poroshenko, saying Americans and Ukrainians were united by deep bonds.

"I hope the next administration will also want to be a supporter and a partner in your continued progress but as you know no one else can do the hard work but the Ukrainian people."

Biden's visit comes days after Ukrainian forces and Russian-backed rebels accused each other of disrupting a fragile truce declared in late December.

That deal brought fresh hope of an end to almost three years of a conflict that has killed nearly 10,000 people.

Ukraine and its Western allies including the United States accuse Russia of fuelling the war by deploying troops and smuggling arms to separatists, claims Moscow has repeatedly denied.

"It is no secret that Russia does not want you to succeed," Biden said, adding that Russia had for the last decade "used corruption to keep Ukraine vulnerable".

Despite giving broad economic support for the pro-Western government in Kiev, Obama's administration has held off on supplying lethal assistance.