Only Through Peace and Harmony Can Problems Be Resolved: PM 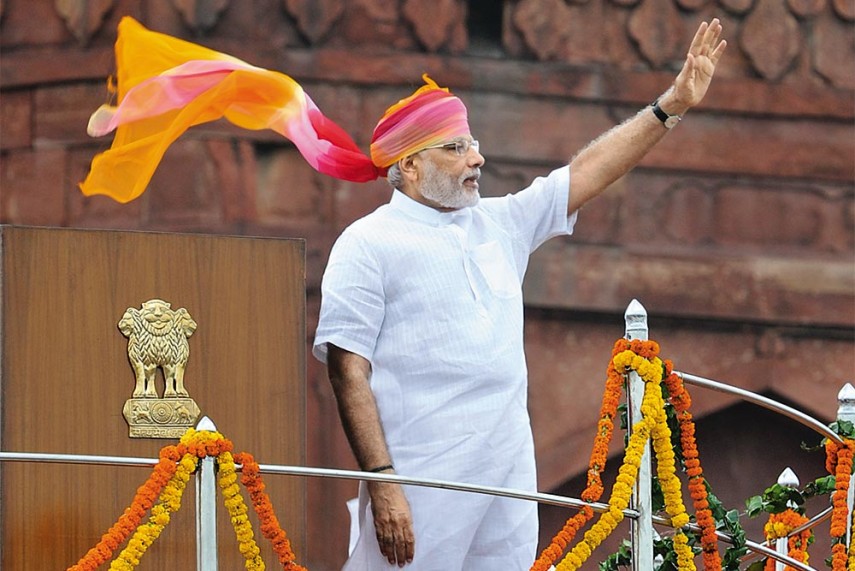 Print
A
A
A
increase text size
Outlook September 25, 2016 11:41 IST Only Through Peace and Harmony Can Problems Be Resolved: PM

Likening the anger in the country over Uri attack to that witnessed in the 1965 war, Prime Minister Narendra Modi today maintained that those responsible for the terror strike will surely be punished as he asserted that the army does not speak but displays bravery.

He also sent out a message to the people of Kashmir, which has been witnessing unrest for over two months, saying that "peace, unity and harmony" are the ways to resolve problems and expressed confidence that all issues can be addressed through discussions.

In his monthly radio programme 'Mann Ki Baat' which he began by paying tributes to the 18 soldiers who died in the Uri attack on September 18, Modi said, "this cowardly act was enough to shake the entire country. There is mourning as well as anger in the country."

He said, "This is a loss not only for those families which lost their sons, brothers, husbands. This loss is for the entire country. That is why, today I will say only this much, which I said on that day (of the incident) also and I will repeat it today, that the guilty will surely be punished."

Reposing faith in the Indian army, the Prime Minister said it will foil all such designs through its bravery.

"They (Indian armymen) are the people who take bravery to its pinnacle so that 125 crore people can live a peaceful life," he said.

"We are proud of our army. People and politicians get opportunities to speak and that's what they do. But the army does not speak. The army displays its bravery," Modi said.

He read out a message of an 11th standard student who had expressed anger over the Uri incident and had the desire to do something over it. After lot of thinking, he had resolved to give extra 3 hours to studies every day as his contribution to the country.

Appreciating the child's "constructive thinking", the Prime Minister said, "there is a lot of value to the anger that people of the country have. This is a symbol of the country's awakening. This anger is of the kind of 'do something'... When 1965 war (with Pakistan) broke out and Lal Bahadur Shastri was leading the country, similar was the feeling, anger in the country. There was fever of nationalism. Everybody was keen to do something.

"At that time, Lal Bahadur Shastri ji attempted to represent this feeling in an excellent manner to the world and he gave the slogan of 'Jai Jawan, Jai Kisan' to inspire common people to work for the country."

Modi also said that when Mahatma Gandhi was leading the freedom movement and whenever it attained speed, he would direct that for constructive works in the society.

"We all -- the army should carry out its responsibility, we in the government should fulfill our duties and the citizens should provide constructive contribution with the feeling of nationalism -- then the nation will definitely touch new heights," he said.

In his 35-minute broadcast, the Prime Minister also wanted to specially "speak" to the people of Kashmir.

"The people of Kashmir have started to understand the anti-national forces clearly. And as the reality is dawning on them, they have started distancing themselves from such forces and have started walking on the path of peace," he said.

He said it is the desire of all parents that schools and colleges in Kashmir started working properly and farmers there want that their produce should reach the markets of the country.

"We all know that peace, unity and harmony are the ways to solve our problems and also to ensure our progress and development. For our future generations, we have to cross new heights of development," the Prime Minister said, adding "I am confident that we will resolve all issues together through discussions, will find ways and jointly lay the track for the future generations of Kashmir."

Emphasising that security of common people of Kashmir is the responsibility of the government, he said, "to maintain law and order, the authorities have to take some steps," an apparent reference to the tough measures taken in the Valley to deal with stone-pelters that has led to casualties.

At the same time, he said he wanted to tell the security forces that "the capabilities, the power, the laws, the rules" which they have should be used properly as these are for maintaining law and order and to ensure peaceful living of the people of Kashmir.

The Prime Minister also referred to the recent Paralympics and hailed the Indian athletes who participated in these games and won medals for the country.

He said he had received messages from a number of people, urging him to talk about the Paralymipcs in the 'Mann Ki Baat' programme. This, he said, reflects the "emotional attachment" of the people for the Paralympics athletes of India.

"Perhaps, more than the games, this Paralympics and the performance our participants has completely changed the outlook towards the 'Divyang' (specially-abled people)," he said, while hailing them and narrating who got which medal.

Modi, who met the Paralympics participants after their return recently, quoted medal winner Deepa Malik as saying that by winning the medal, she had defeated her disability.

He also talked about the 'Swacch Bharat' campaign launched by him two years ago and said it had picked up momentum with people becoming more aware about cleanliness and contributing towards it.

He said over the last two years, 2.5 crore toilets have been constructed and 1.5 crore more will be built.

However, he said the practice of open defecation was still prevalent and must stop.

He appealed to the corporate world to contribute in this regard, particularly by sponsoring the youth who want to work in this direction.

As his monthly radio programme is nearing the second anniversary, the Prime Minister said he had used the broadcast only to connect to the people with their issues rather than talking about his government's achievements or indulding in blame-game.

He said he had resisted a lot of pressure in ensuring that.

Modi also mentioned about change of his address from British-era Race Course Road to Lok Kalyan Marg, saying it is a tribute to the common people for whose welfare his government is working.