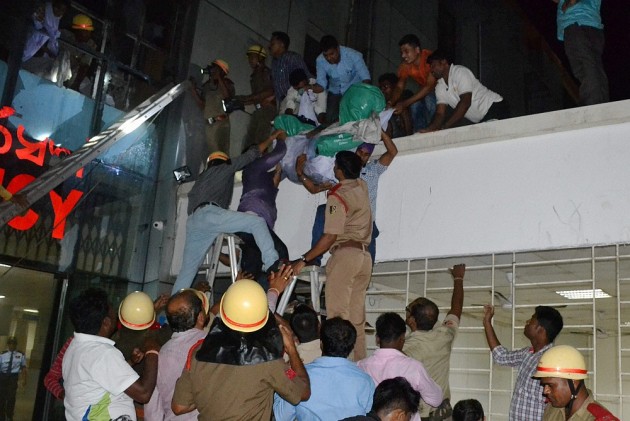 As multiple probes were underway, over 100 patients, mostly from the gutted Intensive Care Unit(ICU) and dialysis unit, were shifted to other hospitals.

While 20 deaths were officially confirmed, authorities of different hospitals where the injured were shifted last night put the toll at 22.

Two separate FIRs have been lodged by Joint Director of the Directorate of Medical Education and Training (DMET) Umakanta Satpathy and the Fire Officer (Central Circle), B B Das at Khandagiri police station, ACP P K Patnaik said.

"In both the cases, allegations of negligence in conduct and safety were levelled against the Sum Hospital authorities. A case will be registered soon," he said, adding that some other organisations have also lodged complaints against the hospital.

As many as 106 patients, who were shifted from the private Sum Hospital following the blaze last night, are now undergoing treatment at different hospitals in the city, Health Secretary Arti Ahuja said, amid reports that some of them are in critical condition. Most of them were from the ICU and the dialysis unit, an official said.

Most of the deaths in the four-storey hospital took place due to suffocation and asphyxiation, a senior official said, adding that majority of the patients at the ICU were on ventilator support.

The authorities of the Siksha 'O' Anusandhan University (SOU), which runs the Institute of Medical Sciences and Sum Hospital, suspended four of its staff members and announced an ex-gratia of Rs 5 lakh each to the victims' familes.

Those suspended were one fire officer, two engineers and one hospital manager, SOU vice-chancellor Amit Banerjee told reporters here, rejecting allegations that there was any irregularity in the management of the hospital.

"We have suspended four officials as part of the hospital's bid to maintain transparency. Tomorrow no one should accuse that evidence was tampered with."

Ahuja said the ICU and dialysis unit of the hospital have been sealed to ensure a proper investigation.

The blaze was suspected to have been triggered by an electric short circuit in the dialysis ward on the first floor which spread to the nearby ICU.

The fire rapidly spread to other areas on the same floor of the hospital building.

Some patients have also been shifted to the SCB Medical College and Hospital at Cuttack for treatment.

Chief Minister Naveen Patnaik visited some of the hospitals, including AIIMS and AMRI Hospital here, to inquire about the condition of the patients undergoing treatment.

The state government has already ordered a high-level probe by the Director, Medical Education and Training, into the incident. In addition, a probe by the revenue divisional commissioner (RDC) has also been ordered, an official said.

Rejecting allegation that the high casualty was due to wrong evacuation process, Banerjee said, "We have followed the best of the evacuation protocol. Had we not followed it the casualty would have been more."

Continue FREE with Ads Pay Rs. 1 to Read Without Ads
READ MORE IN:
National
Next Story : Two Killed in Fire at a High Rise in Mumbai's Cuffe Parade
Download the Outlook ​Magazines App. Six magazines, wherever you go! Play Store and App Store