Obama to Become First Sitting US President to Visit Hiroshima 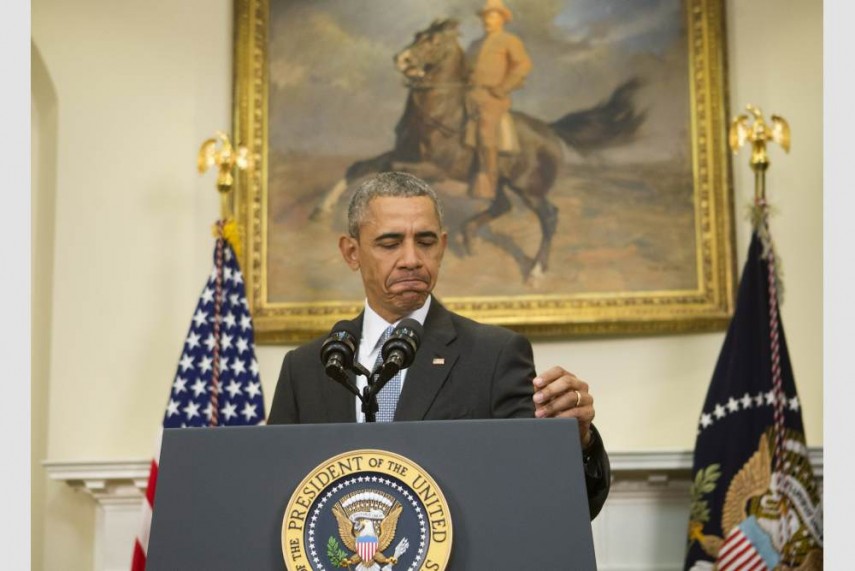 Print
A
A
A
increase text size
Outlook May 10, 2016 21:12 IST Obama to Become First Sitting US President to Visit Hiroshima

Barack Obama will make a historic visit to Hiroshima this month to "highlight his continued commitment" to nuclear disarmament, becoming the first sitting US president to tour the site where America first dropped an atomic bomb in 1945, killing an estimated 140,000 people.

The White House today said that Obama, who has been often accused by critics of making an "apology tour" to the Middle East and Europe during the first year of his presidency for the misdeeds of the Bush administration, will visit Hiroshima when he travels to Japan and Vietnam from May 21 to 28.

"The President will make a historic visit to Hiroshima with Prime Minister (Shinzo) Abe to highlight his continued commitment to pursuing the peace and security of a world without nuclear weapons," White House Press Secretary Josh Earnest said.

Deputy National Security Adviser Ben Rhodes said in a blog post that "in making this visit, the President will shine a spotlight on the tremendous and devastating human toll of war."

Rhodes said that Obama, a Nobel laureate, will visit the Hiroshima Peace Memorial Park, a once-ruined site at the centre of the city dedicated to the victims of the atomic bombing, on May 27 where he will share his reflections on the significance of the site the events that occurred there.

But he reaffirmed that the US president is unlikely to seek apology for that chapter in the American history.

"He will not revisit the decision to use the atomic bomb at the end of World War II. Instead, he will offer a forward- looking vision focused on our shared future," Rhodes wrote.

The symbolic visit would come after months of debate and speculation. Obama will be joined with Prime Minister Abe, who is hosting the G-7 summit in Ise-Shima later this month.

In April, secretary of state John Kerry visited the city, where 140,000 people died after the bombing on August 6, 1945, including those who died from severe radiation exposure.

After a second bombing of Nagasaki - the World War II ended. But opinions remain divided whether their use ended the brutality of the war and avoided a US invasion of Japan.

Rhodes said Obama's visit will reaffirm US' long-standing commitment — and the President's personal commitment — to pursue peace and security of a world without nuclear weapons.

"As the President has said, the United States has a special responsibility to continue to lead in pursuit of that objective as we are the only nation to have used a nuclear weapon," he said.

"That commitment has guided our efforts to promote non-proliferation and nuclear security — a theme at the heart of four Nuclear Security Summits that the President hosted — and to take concrete steps to reduce the role of nuclear weapons in our security and in the policies of other global powers," Rhodes said.

This would be particularly sensitive for Obama's visit. This December marks the 75th anniversary of Japan's attack on Pearl Harbor, in Obama's home state of Hawaii.

This would also be Obama's final G-7 Summit participation.

"This gathering will enable G-7 leaders to advance common interests across the full range of economic and security priorities and to address pressing global challenges," Rhodes said.

Obama and Abe will meet bilaterally to further advance the US-Japan alliance, including their cooperation on economic and security issues as well as a host of global challenges.

Obama will reach Japan from Vietnam, his first stop.

In Vietnam, he will hold official meetings with Vietnam's leadership to discuss ways for the US-Vietnam Comprehensive Partnership to advance cooperation across a wide range of areas, including economic, people-to-people, security, human rights, and global and regional issues.

In Hanoi, Obama will deliver a speech on US-Vietnam relations. During meetings and events in Hanoi and Ho Chi Minh City, Obama will discuss the importance of approving the Trans-Pacific Partnership this year.

Continue FREE with Ads Pay Rs. 1 to Read Without Ads
READ MORE IN:
Barack Obama International
Next Story : Reforms Will Not Pull You Back: SC to BCCI
Download the Outlook ​Magazines App. Six magazines, wherever you go! Play Store and App Store