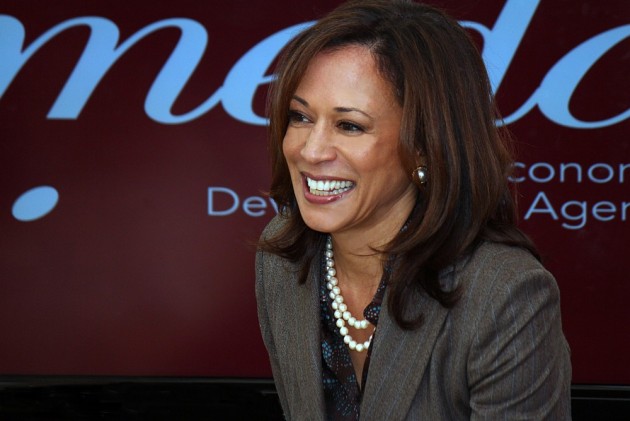 US President Barack Obama and Vice President Joe Biden today backed California's Indian- American Attorney General Kamala Harris to be the state's next Senator, brightening her chances to become the first from the community to ever be a member of the Upper House.

Obama praised 51-year-old Harris as a "lifelong courtroom prosecutor" who has fought international gangs, oil companies and the big banks responsible for the mortgage crisis.

Given that California is a Democratic state, Obama's endorsement virtually seals her victory.

Vice President Biden said the Senate "needs people like her - leaders who will always fight to make a difference and who never forget where they come from."

Welcoming the support from the country's top leaders, Harris said, "I am honoured to receive the support of the President and Vice President, two leaders who have worked tirelessly to improve life for our families and get results for all people.

"They are incredible leaders for our nation, and I look forward to our continued work together in the months and years ahead."

For Sanchez, the Orange County congresswoman, the endorsements are a stinging rebuke and another political obstacle to the many she must overcome by the November election, the Los Angeles Times reported.

Harris, who was born in Oakland, California, is the daughter of an Indian mother who emigrated from Chennai in 1960 and a Jamaican American father.

The President's nod caps a string of major endorsements for Harris, the candidate of choice among the Democratic Party's power barons and some of the left's most influential interest groups. It also sends a clear signal to Democratic donors, many of whom have stayed on the sidelines this election, the paper said.

Harris already has won the support of California Governor Jerry Brown and the California Democratic Party, along with Senator Elizabeth Warren (Democrat from Massachusetts), a favourite of the left.

Harris has more than a 3-to-1 edge over Sanchez in fund- raising and easily topped a crowded field of Senate candidates in the June primary. The attorney general also held a 15- percentage-point lead over Sanchez in the latest Field poll, the paper said.

The two Democrats will face off in the November election, setting the stage for the highest-profile contest between two members of the same party since California adopted a top-two primary election system.