Now Vijender Singh Asks to Be Considered for the Padma Shri 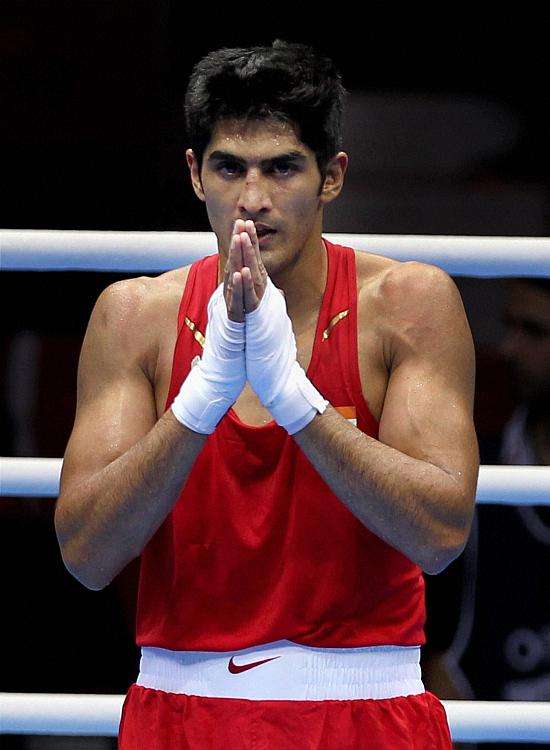 Print
A
A
A
increase text size
Outlook January 06, 2015 13:27 IST Now Vijender Singh Asks to Be Considered for the Padma Shri

With Saina Nehwal getting the Sports Ministry's recommendation for the Padma Bhushan after a furore over her nomination being rejected, star India boxer Vijender Singh also threw his hat in the ring for the civilian honour but insisted he won't be "hurt" in case of a rejection.

Speaking to PTI, Vijender said he preferably wants two-time Olympic medal winning wrestler Sushil Kumar to get the honour, as originally recommended by the Sports Ministry.

But in case, one more sportsperson is taken into consideration following Saina's late application, then the Ministry might as well give his name a thought as well.

"I was awarded Padma Shri in 2010, the same year as Saina. And if you compare, then me and Saina are at par on the performance front. Since my 2008 Olympic bronze and the 2009 World Championships bronze, I have gone on to win an Asian Games gold, a bronze and a silver in Commonwealth Games besides a gold in the World Police Games. So if her name can be considered then I can also try my luck," Vijender said.

"My first preference is Sushil. He is without doubt the most successful Indian athlete ever and he should be given preference over everybody but in case the government is considering other names, then they can consider my name too," he added.

The 29-year-old, a former world number one in the middleweight division, said he would have no hard feelings should he be rejected for the honour this year.

"I am just trying my luck, I am not saying that give it to me or I will be hurt if I don't get it. I am merely saying, consider my name and take a call accordingly," he said.

Vijender has already requested Boxing India to forward his name but it remains to be seen whether the Sports Ministry would oblige given that the last date of submission of applications is long over and Saina's name was sent as a special case after she went on record to express her displeasure at being ignored.

"If I can be considered under given rules and regulations, it would be fine. I am not demanding it," he said.

Meanwhile, a Boxing India (BI) official said that Vijender has been asked to send his application to the Federation and then a call would be taken whether to forward it to the Sports Ministry.

"We have told Vijender to send us his application and we will assess whether it would be sent to the ministry at this stage. The last date of submission is over so let's see what can be done," a BI official said.