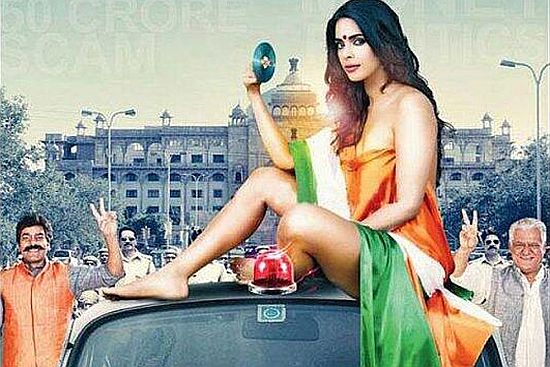 The Hyderabad High Court today issued notices to Bollywood actress Mallika Sherawat and the Centre on a PIL against a poster of her upcoming film Dirty Politics that shows the Bollywood actress draped in the three colours of the national flag.

Admitting the PIL, the high court also issued a notice to K C Bokadia, producer of the film.

In his petition filed last week, a city-based rights activist T Dhangopal Rao alleged the actress and the film producer have intentionally insulted the national flag in the poster of Dirty Politics.

Assistant Solicitor General of India Narayan Reddy, who represents the government of India in the Hyderabad High Court, said the court ordered notices to the Centre, the film's producer and the actress and asked the secretary of the Union Home Ministry (respondent 1) and other respondents to file their counter affidavits within three weeks.

"A division bench comprising Chief Justice Kalyan Jyoti Sengupta and Justice P V Sanjay Kumar heard the petition and today issued orders for notice to the secretary of the Union Ministry of Home Affairs, the actress and the producer asking them to file their affidavits before it within three weeks," said Dhangopal Rao.

"The film poster shows Mallika sitting atop a car fitted with a beacon and wrapped in tricolour below her waist. Offended by it, I filed the petition seeking action against the actress," Rao told mediapersons.

Use of the national flag for commercial purposes is an insult to the nation's honour, Rao claimed in the petition and sought the court to restrain the producer from further exhibiting or displaying of the poster as part of the film's promotion campaign.