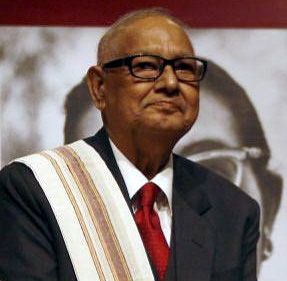 outlookindia.com
-0001-11-30T00:00:00+0553
Noted urdu poet and Jnanpith awardee Akhlaq Mohammed Khan, who shot to fame for penning ghazals in Bollywood classics like 'Umrao Jaan', passed away here today after a protracted illness. He was 76.

The poet, better known by his pseudonym Shahryar, is survived by his two sons and a daughter.

Khan, who also won the Sahitya Akademi Award in 1987, was one of the most celebrated writers of ghazals and nazm in Urdu language

Born in Aonla town in Bareilly district on June 19, 1936, Khan pursued his higher education at Aligarh Muslim University, before obtaining a PhD and joining the university's faculty in 1966.

He retired as Chairman of the university's Urdu department in 1996.

Khan drew national fame as a lyricist for the words he penned in films like Gaman, Umrao Jaan and Anjuman.

According to a spokesperson of AMU, the poet will be laid to rest at the University's graveyard tomorrow afternoon.