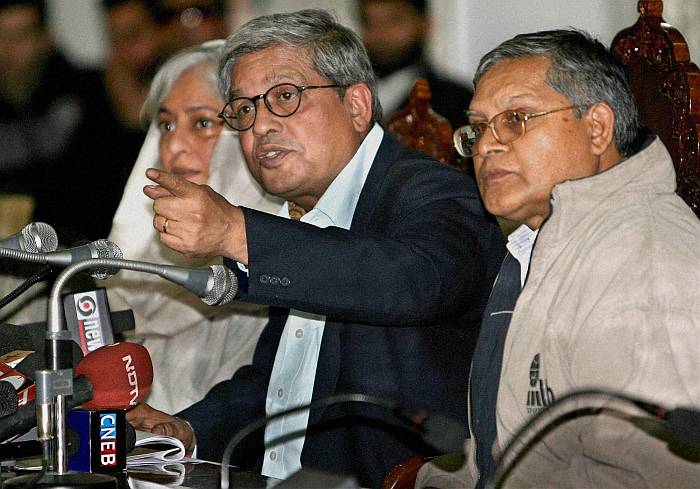 Noted journalist Dileep Padgaonkar, who was a part of the three-member interlocutors group for Jammu and Kashmir in 2008, passed away here today after brief illness.

72-year-old Padgaonkar, a former editor of The Times of India, was unwell for past several weeks and died at a hospital in Pune, family sources said.

He passed away at a private hospital here where he was brought in a critical condition last week.

Pathare said a team of doctors tried to revive Padgaonkar, but he breathed his last today.

Born in Pune in 1944, Padgaonkar did his schooling from St Vincent's High School and later graduated from Fergusson College in political science.

He began his career in journalism at an early age and joined the Times of India as its Paris correspondent after receiving a doctorate in Humanities in 1968.

He served the paper in various capacities before he was appointed its editor in 1988, a post he held for six years. In between, from 1978 to 1986, he also worked with UNESCO in Bangkok and Paris.

Padgaonkar was appointed as one of the members of the three-member interlocutors group on Jammu and Kashmir, set up by the government after continuous unrest in the Valley in 2008. The veteran journalist had once said that he held the second most important job in the country after the Prime Minister.

Founder editor of the online news website The Wire Sidharth Vardarajan said it was a "terrible loss".

"Just heard that my friend and former editor, Dileep Padgaonkar, passed away in Pune. Terrible loss, feel gutted," he said on Twitter.

Senior journalist Rajdeep Sardesai said Padgaonkar was "a man of culture and intellect".

"My first editor Dileep Padgaonkar, a man of culture and intellect, someone who encouraged young talent, has passed away," he tweeted.

Continue FREE with Ads Pay Rs. 1 to Read Without Ads
READ MORE IN:
Dileep Padgaonkar Society
Next Story : PM Emphasises On Connecting With The Spirit of The Constitution
Download the Outlook ​Magazines App. Six magazines, wherever you go! Play Store and App Store