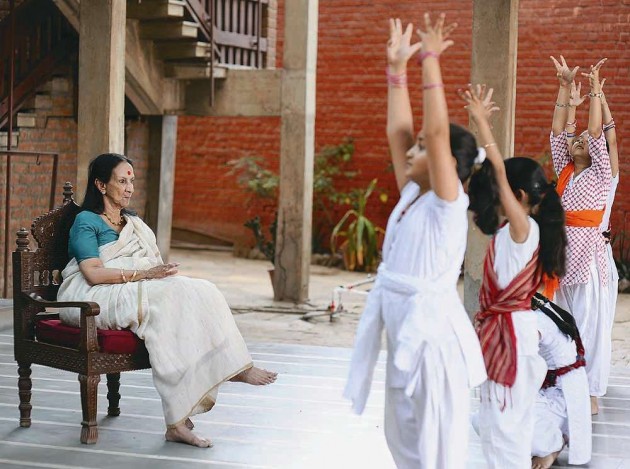 Veteran danseuse and Padma awardee Mrinalini Sarabhai, the exponent of classical dance forms who used her art to highlight the problems faced by modern society, died here today due to age-related problems.

Mrinalini Sarabhai was admitted to a city-based hospital yesterday, but was brought to her home early today morning where she breathed her last.

Sarabhai choreographed over 300 dance-dramas touching upon modern subjects and contributed immensely to popularise the art in the country and abroad.

Coming from the family of achievers, an exponent of classical dance forms, she broke the barrier of tradition of the age-old dance performance based on religious themes while introducing tales of modern times.

Some of her dance-dramas -- like the musical Krishna–Gopala and This Mahabharata -- mirror today's world.

"My mother was a modern woman with deep roots in our tradition," said her grieving daughter Mallika Sarabhai, who is also a renowned danseuse.

"Without compromising an inch from the classical dance forms of Bharatnatyam and Kathakalli, using them she created numerous dance-dramas highlighting the problems faced by modern society," Mallika said.

Her reputation for innovation is unmatched -- from classical dance to cutting-edge performance art. Her creative expressionism made her dance form simple, eloquent and visually inspiring, she said.

Born into the renowned Swaminadhan family of Chennai with roots in Kerala, Sarabhai began her training in Bharatanatyam at an early age from her guru Meenakshi Sundaram Pillai. She later learnt Kathakalli.

After early schooling in Chennai, she went to schools in France and Switzerland. She returned to India to become a student at Rabindranath Tagore's university in Santiniketan, where she was introduced to other art forms, at a time when the atmosphere was charged with the spirit of nationalism.

Sarabhai also trained in Java (Indonesia) and the United States of America, where she studied acting at the American Academy of Dramatic Arts. MORE

At the height of the movement for Independence, she met and married Vikram Sarabhai, the Ahmedabad-based industrialist, scientist and father of India's space programme, in 1942.

The support of Vikram Sarabhai became crucial for her talent to flourish in the eras of 1940's and 50's when women were not given much freedom.

With his support, she founded Darpana, the academy of dance, drama and music in Ahmedabad, in 1948, which has developed as one of the great centre of learning of dance for students from all over the country and even foreign lands.

Over the years, she directed her troupe and travelled extensively, receiving many accolades and reviews.

More than 300 dance-dramas were to her credit as a choreographer, and many of those were written by her.

She received many awards and citations in recognition of her artistic eminence, including Padma Bhushan (1992) by Government of India, the Desikottama (D Litt Honoris Causa, 1987) from Visva-Bharati University in Santiniketan, and the medal and Diploma of the French Archives Internationales de la dansei from the French Government.

Sarabhai was also Chairperson of the Gujarat State Handicrafts and Handloom Development Corporation (Gurjari) for many years and worked to revive of traditional techniques, designs and village crafts.

She also tried to revived puppetry and folk theatre by creating special groups within Darpana and inviting artists to work with her.

She is survived by son Kartikeya Sarabhai, founder of Centre of Environment Education (CEE), and daughter Mallika, an activist and classical dancer.