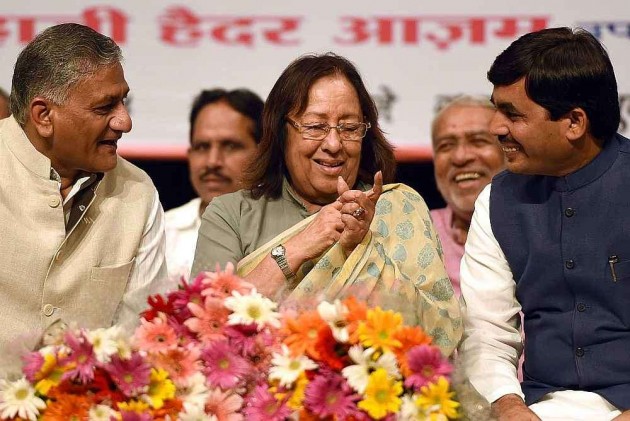 Minority Affairs Minister Najma Heptulla has rejected the contention that Muslims are feeling insecure under the BJP-led regime and said the community has felt alienated since Independence because of the policies of successive Congress governments.

"Muslims are alienated because they are economically and educationally backward. Now people are saying these utterances (against Muslims) are making them feel alienated.

She was responding to a query whether objectionable comments and hate speeches by right wing elements were alienating the community under the Modi government.

"They were alienated already, relegated into backward situation, because they were educationally and economically alienated and social alienation is linked to it. This is the genesis of the whole situation. You just don't feel alienated that somebody made a statement," she asserted.

Attacking the Congress, the Minority Affairs Minister said in its successive regimes, the party only lent "vocal support" to Muslims while the present government has put things into motion through policy initiatives and programmes.

The Minister, however, refused to react specifically to objectionable utterances by some BJP leaders and ministers or the controversy surrounding 'Ghar Wapsi' programme and the ban on beef in some states.

She also dismissed a US religious panel report that communal atmosphere in India has been vitiated since the 2014 general elections, and said people sitting abroad are often far removed from reality.

"People sit somewhere and prepare reports. They don't realise what kind of sensitive fabric Indian society is. In villages, Hindus and Muslims live together and for centuries.

"People who try to create dissent and divide in the country don't understand... They sit abroad in America and make such reports," she said.

Hitting out at Congress, Heptulla said the party which has still not owned up responsibility for the anti-Sikh riots of 1984, was talking of the interests of the minorities.

"During their rule, Sikhs were massacred. It was a genocide. Did they take the responsibility? Today people are living in transit camps and they are talking about minorities," Najma, who quit Congress in 2004, said.

She referred to the recent evacuation of Indians from strife-torn Yemen, majority of whom were Muslims, to drive home the point about BJP's commitment to the cause of the Muslims.

The Minister said the budgetary allocation to her ministry was not reduced this year though there was a 10 per cent additional devolution to the states.

A proposal to increase the authorised share capital of the National Minorities Development and Finance Corporation from Rs 1,500 crore to Rs 3,000 crore was also cleared by the Union Cabinet in February this year, something which the previous UPA government had failed to do, she said.