Not Averse Of Shifting Shahabuddin To Tihar Jail: Bihar Govt To SC 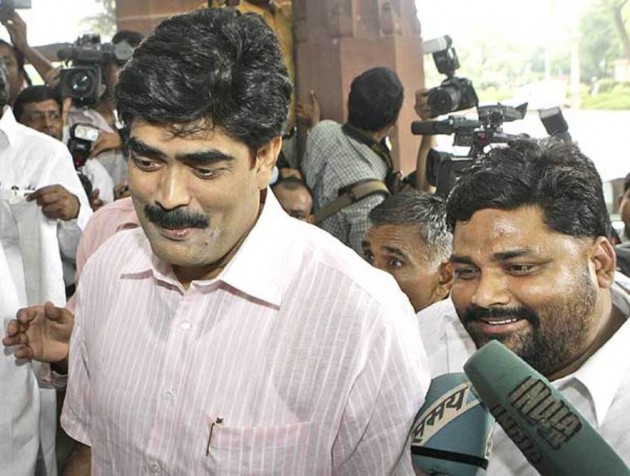 Print
A
A
A
increase text size
Outlook November 29, 2016 18:28 IST Not Averse Of Shifting Shahabuddin To Tihar Jail: Bihar Govt To SC

The Bihar government on Tuesday told the Supreme Court that it is not "averse" to shifting of controversial RJD leader Mohammad Shahabuddin from Siwan jail to Tihar prison in Delhi.

The state government, in which RJD is a coalition partner, concurred with stand of CBI which has already agreed to suggestion of the apex court that alleged history sheeter be shifted to Delhi as his continous presence in Bihar may adversely impact the trials in various pending criminal cases against him.

The government told the bench comprising justices Dipak Misra and Amitava Roy that Shahabuddin has been facing trial in 45 cases including one in Jharkhand.

"We are not averse to shifting of the accused (Shahabuddin) to Tihar jail but the court should also decide the mode of trial of pending cases against him," the counsel representing the Bihar government said.

During the hearing, the bench said, "You (the Bihar government) file the list of all the cases against him including in which he has been convicted or acquitted".

The counsel said that the list has already been filed and is on the apex court records.

Senior advocate Dushyant Dave appearing for Siwan-based Chandrakeshwar Prasad, whose three sons have been killed in two separate incidents, said that all these incidents have taken place when Shahabuddin was in Siwan jail.

He also informed the bench that Shahabuddin had alleged that lack of means while seeking legal aid counsel to defend him in various cases. The plea was allowed by the trial court.

Dave further said that interestingly, the state government challenged the order in the Patna High Court which in turn stayed the trial court order leading to stalling of proceedings in all criminal cases against Shahabuddin.

"Since the legal aid counsel was looking all his 45 cases, the trial eventually got stayed after the Patna High Court order," Dave said.

Senior advocate Shekhar Naphade, appearing for Shahabuddin, said that he is in jail for past 11 years, how can he hire a private lawyer to defend himself.

The hearing, however, remained inconclusive and will continue on Wednesday.

The apex court had on Monday mulled shifting the RJD leader from Siwan jail in Bihar to Tihar Central Jail in the national capital, saying it is test case for the "concept of fair trial and witness protection".

The bench had on Monday asked the lawyers appearing for different parties to come prepared on the point of transfer of cases and Shahabuddin to Delhi from Siwan.

CBI had filed status report in the murder case of scribe Rajdeo Ranjan and had that it will welcome if the cases are transfered to Delhi.

On October 17, the apex court had granted three months time to CBI to conclude probe in the sensational scribe murder case, and directed that six accused, including Mohammad Kaif and Mohammad Javed who were seen alongside the RJD leaders, cannot seek statutory bail on the ground of non-filing of charge sheet in the matter.

Ranjan, 42, a senior journalist working with a vernacular daily, was shot dead on the evening of July 22 in Siwan town.

The apex court, on September 23, had directed CBI to proceed with its probe into the murder of the journalist and asked Bihar Police to provide protection to the family members of the slain scribe.

It had also issued notices to Shahabuddin, Tej Pratap Yadav and the Bihar government on a petition by Ranjan's wife who also sought transfer of the case from Siwan to Delhi.

The RJD chief's son was seen in a photograph published in newspapers with one of the two sharp shooters of alleged gangster Shahabuddin.

Asha, the wife of the deceased scribe, had moved the Supreme Court seeking transfer of the probe and trial in the case to Delhi alleging that media photos had shown two absconding killers of her husband in the company of Shahabuddin and Tej Pratap Yadav.