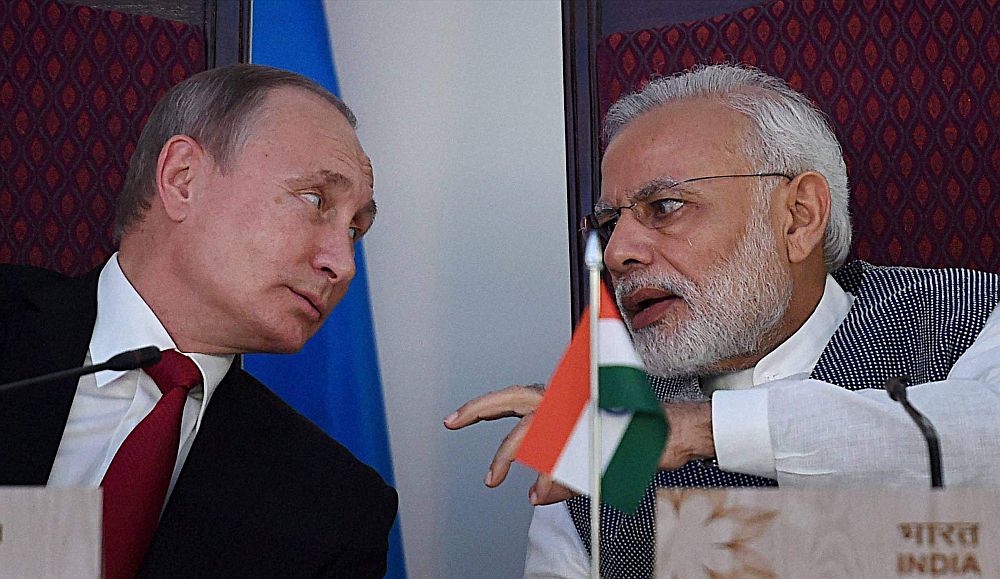 President Vladimir Putin said on Thursday that Russia does not have any "tight" military relationship with Pakistan, and asserted that its close friendship with India cannot be diluted.

During an interaction, Putin told PTI that there is no other country in the world that Russia has "deep cooperation" in delicate areas such as missiles, and it benefits from cooperation with India.

But at the same time, Putin sidestepped a question on Kashmir, and said "it is up to you" to assess whether Pakistan is fuelling terrorism in the Indian state. "But no matter where the threat comes, it is unacceptable and we will always support India in its fight against terrorism," he added.

Putin further said that just because Russia has a "special relationship" with India, it does not mean India should be restricted in having contacts with other "partnering countries. This is ridiculous."

Sitting around a rectangular table with a select group of global news agency editors, the 64-year-old Russian leader took questions one by one on subjects related not only of interest to the editors' countries but also of wider global concerns such as Syria, US President Donald Trump and the future of an emerging multi-polar world.

"India is a huge country of more than 1 billion population. Russia is also a huge country. Both Russia and India have a lot of context and mutual interests. We are respectful toward all Indian interests," he said, citing the deep defence relations between the two countries.

"I don't think we should push figures here in our military cooperation because it has an unprecedented level in its volume and quality. (But) there is no other country in the world that we have such deep cooperation in delicate areas such as missiles, and we benefit with cooperation with India. And this results from our trust-based relations with India," he said.

He did not elaborate, but this was a clear reference to the Russia's long willingness to share high-end defence technology including missile technology with India, which most other countries restrict.

On a question if Russia will use its influence to get Pakistan to stop terror attacks in Jammu and Kashmir, he said, "We will always support India in its fight against terrorism. I believe Pakistan is taking immense steps to stabilise the situation in the country."

He noted that India and Russia, as part of their summit, are "having a frank dialogue on all these threats. India for us is one of our closest friends. We not only understand each other but also support each other."

The interaction was held at the Konstantin Palace, a sprawling complex of grand buildings filled with 18th century paintings, porcelain, lawns, waterways and pavilions overlooking the Gulf of Finland.