No Raid On NDTV, Inquiry On 'Mother Company' Which Owns It, Says MoS Rathore 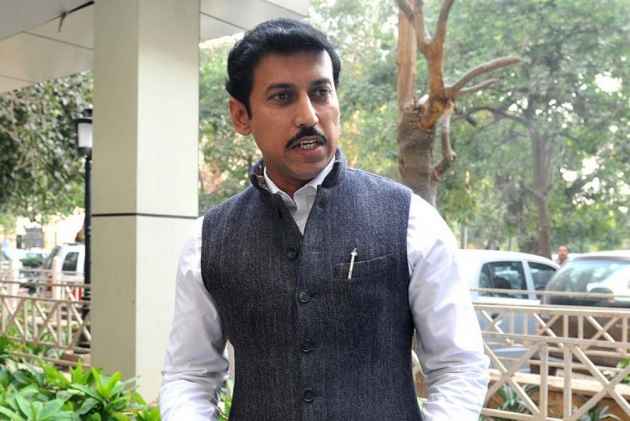 Minister of State for Information and Broadcasting Rajyavardhan Singh Rathore on Monday spurned NDTV channel's 'witch-hunt' charges after a case was registered against the channel's co-founder Prannoy Roy and others for causing an alleged loss to a private bank, and said that the inquiries are only happening on the mother company that owns the news channel.

"Different agencies are trying to create confusion, there was no raid on NDTV, there are inquiries happening on the mother company who owns NDTV," Rathore told ANI.

Making the clarification, he added that the government is truly committed to the freedom of expression but it will also ensure that the law of the land is not broken and fair inquiries are done on the issue.

"The government is completely committed to freedom of expression be that of the press or of an ordinary citizen. Whatsoever the concerned person must provide the necessary documentation to the inquiring agency," he said.

NDTV, earlier in the day, vowed to fight tirelessly against the 'witch-hunt by multiple agencies'.

The news channel's statement came hours after the Central Bureau of Investigation (CBI) registered a case against Roy, his wife Radhika Roy, a private company and others for causing an alleged loss to a bank.

"This morning, the CBI stepped up the concerted harassment of NDTV and its promoters based on the same old endless false accusations. NDTV and its promoters will fight tirelessly against this witch-hunt by multiple agencies. We will not succumb to these attempts to blatantly undermine democracy and free speech in India," the NDTV said in a statement.

It further said that it has one message to those who are trying to destroy the institutions of India and everything it stands for: "We will fight for our country and overcome these forces."

The CBI said that searches are being conducted today at four places including Delhi and Dehradun.

Meanwhile, the caretakers at Roy's house in Dehradun said that around six to seven people from the CBI came in the morning and searched the house.

CBI sources said that the case has been registered for causing an alleged loss of Rs. 48 crore to ICICI bank. (ANI)

Continue FREE with Ads Pay Rs. 1 to Read Without Ads
READ MORE IN:
Rajyavardhan Rathore Society
Next Story : After Being Spotted During Ind-Pak Match, Vijay Mallya Says He Intends To Attend All Games To Cheer India
Download the Outlook ​Magazines App. Six magazines, wherever you go! Play Store and App Store