No One Fit for President’s Post Except Mohan Bhagwat, RSS HQ Is Second Seat Of Power, Says Shiv Sena 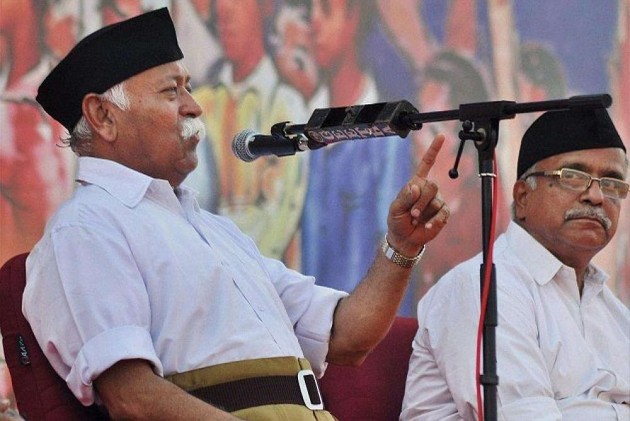 Print
A
A
A
increase text size
Outlook April 25, 2017 14:24 IST No One Fit for President’s Post Except Mohan Bhagwat, RSS HQ Is Second Seat Of Power, Says Shiv Sena

The Shiv Sena today said that the RSS headquarters has become the "second seat of power" in the country and it does not deem anybody fit for the president's post except Sangh chief Mohan Bhagwat.

The Uddhav Thackeray-led party, which has had strained ties with ally BJP, had earlier also suggested that Bhagwat be made the next President of India. However, Bhagwat had dismissed such suggestions and asserted that even if his name is proposed, he "will not accept it".

The Sena said that the ambitions of some strong contenders for the president's post may have got derailed post the apex court order in Babri case and wondered if some "new calculations" were made when senior BJP leader Murli Manohar Joshi called on Bhagwat last week.

Notably, top BJP leaders L K Advani, Joshi and Uma Bharti will be tried for criminal conspiracy in the 1992 Babri Masjid demolition case as the Supreme Court last week allowed a CBI plea for restoring the charge against them.

The Sena, in an editorial in party mouthpiece 'Saamana', today said, "Advani and Joshi are BJP veterans. Their contribution in the formation and rise of the party is immense."

"Though they may not have much work in the party after a new generation of BJP leaders have taken over but there are attempts being made to gauge if they have any importance left in the upcoming presidential polls," the editorial said.

Referring to the meeting between Joshi and Bhagwat, it said anything can happen if the RSS chief wishes it.

"Thus, did the meet between the two mean that Joshi was making some new calculations with Bhagwat? Anything can happen if the RSS chief wishes so. The RSS headquarters has become the second seat of power in the country today," the Sena said.

The party also said that as of now it does not deem anybody fit for the president's post except Bhagwat.

The apex court had last week clubbed the trial in the Babri Masjid demolition case pending against the leaders and 'karsevaks' and ordered day-to-day trial with the proceedings to be completed in two years.