No Mercy for Rajiv Gandhi's Killers: Centre to SC 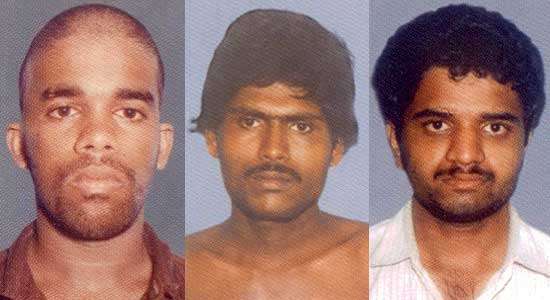 The Centre today asserted in the Supreme Court that the killers of former Prime Minister Rajiv Gandhi did nor deserve any mercy as the assassination was the result of a conspiracy involving foreign nationals.

"Our former Prime Minister was killed by these people. There was a conspiracy to kill him in which foreign nationals were also involved. What mercy is to be seen or shown? This is to be looked by you (apex court).

"Their mercy plea was rejected by the President and also by the Governor (of Tamil Nadu). So what mercy is being argued?" Solicitor General Ranjit Kumar told a bench a five-judge Constitution Bench headed by Chief Justice H L Dattu.

The bench was hearing the maintainability of the Centre's petition opposing Tamil Nadu government's decision to remit the life sentences and set free seven convicts in Rajiv Gandhi assassination case.

The issue of mercy was raised by senior advocates Ram Jethmalani who was appearing for Murugan and traced the history of judicial proceedings.

Earlier the court, on the plea of the erstwhile UPA government, had stayed Tamil Nadu's decision to set free all the seven convicts after remitting their sentences. It had framed seven questions to be decided by a Constitution bench on the scope of executives' power of remission.

However, Jethmalani and Tamil Nadu government's senior counsel Rakesh Dwivedi questioned the maintainability of the Centre's petition saying the Article 32 petition cannot be invoked by the Centre as it did not concern any violation of the fundamental rights with which the state is affected.

The hearing witnessed a debate during which the court said the Centre has a parental duty to voice the grief of victims of the 1991 assassination in Sriperumbudur.

"The Supreme Court commuted the convicts' death penalty to life. The victims did not complain. But here the state government further tinkers with our judgement. Can CBI through the Centre not move under Article 32 of the Constitution? After all, it's CBI probe which got them death penalty," the bench, also comprising Justices F M I Kalifulla, Pinaki Chandra Ghosh, Abhay Manohar Sapre and U U Lalit observed.

The bench said "when CBI is expressing the rights of the victims, then certainly we can entertain the petition of Union of India. CBI as an ivestigator and prosecutor was concerned with the case and if somebody tries to tinker with the case, can't they come before us?"

"If the state tries to tinker, can't CBI come and say I provided protection to this person and can't I come to protect them in this court?" it said.

However, Dwivedi said the role of CBI comes to an end with the case reaching finality in courts and here the apex court has already pronounced its judgement.

When the bench said it was going to examine who has the executive power of remission -- the Centre or the state government - in the cases investigated and prosecuted by the Central probe agencies, the Tamil Nadu counsel said "it is a tough question and there is a tough conflict. It is the issue."

The bench said it would be examining whether there was an application of mind by Tamil Nadu government in remitting the life sentences of the seven convicts.

"When the matter is entrusted to CBI, who will have the power to remission? This is an intense question and needs deeper consideration," the bench observed while addressing various issues including whether the state can file a writ petition under Article 32 of the Constitution in public interest.

The Solicitor General submitted that 18 persons were killed and 48 were critically injured in the 1991 blast and "it is the government who has to take care of interests of the victims. The concept of parens patriae kicks in".

However, the bench also posed some questions to the Centre saying "once we have commuted the death penalty to life, the ball is in the state government's court to decide whether to use its power of remission to release the convicts or not.

"Now, here the State says they have been in prison for 23 years and that is enough... So why do you come to us like a public-spirited person?" the bench asked the Centre.

The Solicitor General responded by saying "life imprisonment is till the end of life. You cannot just release them."

However, Jethmalani raised the issue of liberty of the convicts who have been in prison for over two decades.

He was asked by the bench not to go into the merits of the case and restrict his arguments on maintainability.

The Solicitor General submitted that Tamil Nadu has at no stage since April 25, 2014, the date of reference, in any proceeding let alone filing of a miscellaneous petition or an application or otherwise by a review, sought to impress upon the court nor did it do so before the Constitution bench on July 9, 2014 when notices were issued to all the states that the writ petition itself being not maintainable, why should the referal at all be decided.

"In that view of the matter, it is the submission of the Union that Tamil Nadu is stopped from raising any such issue of maintainability especially in the light of the fact that larger and more important questions of law are required to be decided and a purposive/authoritative pronouncement made by the Constitution bench," Kumar said.

He said even assuming there is this question of maintainability to be gone into, then it is the submission of Union of India that the filing of the writ petition and its maintainability is fully supported by the law in place in this regard not only by virtue of the 2008 Amendment in the Code of Criminal Procedure but also by the case law on the subject.

It is the submission of the Union of India that the accused persons have violated the fundamental rights of the victims and their families in committing the crime and when this court entertained the writ petition filed by the convicts for commuting the sentences, which happened after the date of Amendment of the above provisions in the Code, the convicts did not make the victims or their families parties to the litigation, the Centre said.

"The victims were neither noticed nor heard in the matter before commuting any of the sentences. They ought to have been given an opportunity to argue against the commutation.

"Therefore comes the role of the Union of India in the capacity of 'parens patriae' which has been developed over a long period of time and which has the effect, by virtue of the precedential case law, that the state is the guardian of all especially in crimes the victims who suffer at the hands of the accused and such like persons. Therefore, the maintainability of the instant writ petition cannot be questioned," the Centre submitted.

The apex court had on February 20 last year stayed the state government's decision to release three convicts Murugan, Santhan and Arivu whose death sentence was commuted to life term by it two days before.

It had later also stayed the release of four other convicts Nalini, Robert Pious, Jayakumar and Ravichandran, saying there were procedural lapses on the part of the state government.

Santhan, Murugan and Arivu are currently lodged in the Central Prison, Vellore. The other four are also undergoing life sentence for their role in Gandhi's assassination on May 21, 1991 in Sriperumbudur.

"The issue of such a nature has been raised for the first time in this Court, which has wide ramification in determining the scope of application of power of remission by the executives, both the Centre and the State.

It had said the Constitution bench would decide whether the sentence of a prisoner, whose death penalty has been commuted to life, can be remitted by the government.

Such a bench would also decide whether life imprisonment meant jail term for rest of the life or a convict has a right to claim remission, it had said.

Another issue for the Constitution bench to decide would be whether a special category of sentence may be made for cases where death penalty might be substituted by imprisonment for life or imprisonment for a term in excess of 14 years and to put that category beyond application of remission.

It will also decide whether the Union of India or the State has primacy over the subject matter enlisted in concurrent list of the Seventh Schedule of the Constitution for exercise of power of remission.

The Centre had opposed the decision taken by Tamil Nadu government on remission of sentence, saying that the state has no power of take such a decision and the remission in the present case is illegal and without jurisdiction.