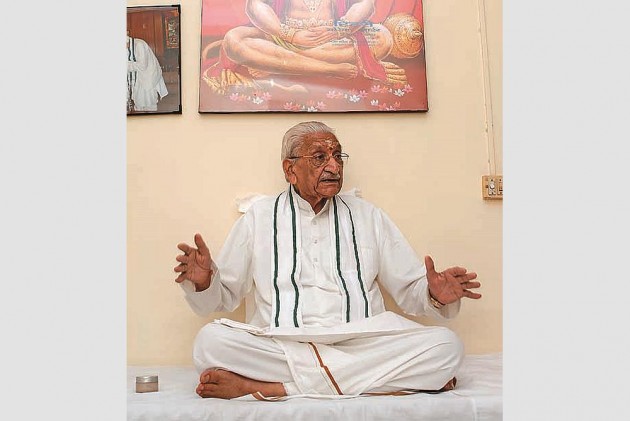 There can be no communal harmony unless Muslims forgo their claim on Ayodhya, Mathura and Kashi, where there are temple-mosque disputes, VHP leader Ashok Singhal said today and asked Sunni Central Board and All India Muslim Personal Law Board to take initiative.

"They (Muslims) should also think how far this struggle will go," he told PTI here.

"Hindu-Muslim brotherhood and harmony cannot be created unless they (Muslims) forgo their claim on three places -- Ayodhya, Mathura and Kashi," said Singhal, referring to the temple-mosque disputes there.

He said until the Muslims give up their claim, "the struggle will continue".

"If they want to take it through court, then there will be 10,000 of cases," Singhal added.

Referring to the Ayodhya temple issue, he said the status quo is only on 110 ft by 95 ft land. "There is no status quo on the 70 acre land which was acquired. This land is deserted like jungle. Who said that this area should not be developed?"

He said around Rs 10,000 crore of government funds have been spent on security ever since the disputed structure was demolished on December 6, 1992.

"But the security which we imagined is not visible," Singhal said, claiming that when terrorists attacked the premises in 2005, it was the local residents who informed the security personnel.

At the same time, he flayed regular deployment of security forces at the disputed site, saying it creates "terror".

Commenting on AIMPLB's attack on the NDA government over the yoga celebrations, Singhal said "vedic culture" and the "sanatan dharma" were the roots of the country.

"The fact is that the ancient vedic culture is the sanatan dharma on which the country is built. Who can stop it? Nobody can stop vedic and sanatan culture," the VHP leader said.

According to him, "vedas are binding the entire country like a rock" and "ved is the basis of all sects in the country, except Jainism and Buddhism".

He said vedas are "pure science" and whatever is being said against it holds no relevance.

"How can they (opponents) fight against this culture? The entire world is coming towards vedic culture. What does yoga mean? When people are gradually recognising yoga, then veda is the rule of the entire universe, framed by the God," Singhal said.

"The world is progressing towards science. Whosoever reads veda is Brahmin. By name no one is a Brahmin," he said.

In a scathing attack on the NDA government, the AIMPLB had accused it of violating the Constitution of secular India and implementing the RSS agenda by introducing practices such as yoga and 'Surya namaskar'.

Reaching out directly to Muslim organisations and Imams, the apex body representing Muslims in the country, also said that the community should remain "cautious" as there are organisations which were "attacking" Islamic beliefs.

In a letter sent to various Muslim bodies and individuals, Rahmani had alleged that the Yoga Day celebrations and introduction of 'Surya namaskar' and Vande Matram in the schools were aimed at implementing the RSS agenda.