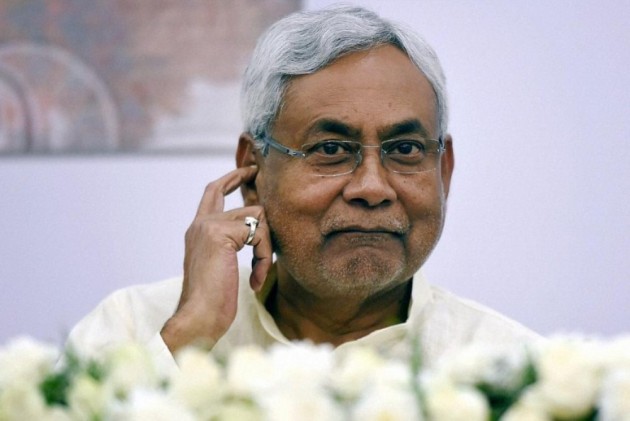 Promulgation of a stringent liquor law coupled with a string of new development initiatives to provide power, toilets and drinking water to every household were the highights of the annual report card released by the Nitish Kumar government on the completion of a year in office.

A function to mark the release of the report was slated for Sunday but was cancelled in the wake of the Indore-Patna Express tragedy in which 143 passengers were killed, many of them from Bihar.

Kumar after assuming power in the state in 2005 had started the tradition of releasing an annual report card to give an account of government's developmental and welfare initiatives taken during the year.

In continuation with this, the report, the first of the grand secular alliance headed by Kumar was released on Monday on the website of the state Information and Public Relations Department.

The 140-page report titled "Development with Justice Mahagathbandhan Government Ist year" showcases the launch of "Saat Nishchay" (seven resolves) to usher in allround development of the state in the next four years of the JD(U), RJD and Congress coalition ministry.

It asserts that "rule of law" prevailed in the state.

"Stringent enforecement of legal procedures and provisions without any malice or discrimination have led to reduction in crime rates with effective punishment to criminals rendering them ineffective. We have cracked down strongly on organised crime and shall continue the momentum with strict enforcement," the CM said at the outset.

While highlighting the new initiatives by way of launch of programmes to realise the goal under 'seven resolves', the state government in its report said that it would continue with programmes and policies of 'Agriculture Roadmap','Mission Manav Vikas' (Human resources development), 'Kaushal vikas mission (skill development mission)' and Industrial promotion and incentives.

"Reiterating our old commitments to programmes of good governance, we have taken some resolves for all-round development of the state," the CM said in the report.

"Our programmes and schemes of education, health and SC/ST, OBC, BC and Minority welfare, women and child development will continue to be implemented in the same or even stronger vigour," he added.

The "Saat Nishchay" promises to provide electricity, drinking water, sewage, toilet and road to every household.

Aimed at youth and women, it also has facilities like interest-free loan of Rs 4 lakh, start-up venture capital, free WiFi in colleges and universities and 35 per cent reservation for women in all state government jobs.

Painting a rosy picture on economic front, the report card highlighted that Bihar registered a growth of 10.59 per cent in Gross State Domestic Product (GSDP) in 2015-16, which is more than the national growth of 8.71 per cent for the corresponding year.

In addition to giving details of the 'seven resolves', the annual report card highlights some other landmark initiatives of the state by bringing in Public Grievance Redressal Act and newer measures in the field of disaster management and police reforms.

The Nitish Kumar government launched Public Grievance Redresal Act, 2015 on the occasion of Sampoorna Kranti Divas and World Environment Day on June 5, 2016 to hear the complaints of the common man and address them within a timeframe.

The report card also gives details of aims and objectives of prohibition.

The CM had announced his seven resolves on the eve of Bihar poll 2015 in an apparent response to Prime Minister Narendra Modi's declaration of Rs 165 crore special package (which included Rs 40,000 of previous packages) during state election.

The resolution for youths provides special schemes/programmes/policies to enable them to become self-reliant.