As the Legislative Council sat for the day, two BJP members Rajnish Kumar and Lal Babu insisted that their adjournment motion on alleged irregularities in implementation of Food law in Bihar be taken up first.

The duo maintained the situation has deprived 40 lakh beneficiaries of subsidised food due to non-availability of ration card to them.

When Chairman Awdesh Narayan Singh refused to entertain the plea, the BJP members rushed to the well and started shouting anti-government slogans.

Chief Minister Nitish Kumar was in the Legislative Council while pandemonium prevailed.

With agitating BJP members refusing to return to their seat and shouting slogans from well, Chairman adjourned the House till 2:30 PM.

Sushil Modi said that the state had to publish final list of beneficiaries after handling objections and claims on the basis of social and economic survey by January 15 this year, but so far such exercise has been done only in 25 districts out of a total of 38.

The Bihar government was directed to send the final list of beneficiaries to the Centre by January 31 which has not been done.

"Due to this, the state may be deprived of foodgrain allotment under the legislation from March 31, 2015," Modi said.

The opposition leader alleged foodgrains were available to black marketeers.

Alleging corruption in distribution of foodgrains, he said despite receiving Rs 285 crore from the Centre, doorstep delivery system has not yet started in the state.

Similarly, many vehicles engaged in transportation of foodgrains were without GPS, he added. 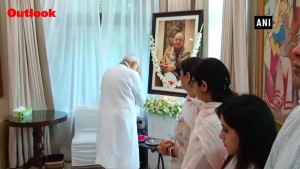