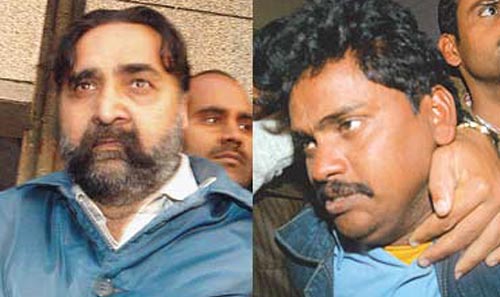 Punjabi businessman Moninder Singh Pandher and his servant Surinder Koli, both accused in the Nithari serial killings, were pronounced guilty of murder and rape of a 14-year-old girl, leaving the CBI red faced as it had given a cleat chit to the entrepreneur.

Pandher (55) and Koli (38), who have been in judicial custody since January 2007, were produced in the jam-packed court of Rama Jain, Special CBI Judge, who pronounced the duo guilty of murder, rape, criminal conspiracy and destruction of evidence.

The quantum of punishment would be pronounced tomorrow, the judge said after delivering a 55-page verdict. The sentence can be death by hanging or life imprisonment.

Moninder Singh Pandher being brought to the Ghaziabad court

CBI filed chargesheet in this case on May 19, 2007 in which the agency while giving clean chit to Pandher, had charged Koli of raping and murdering Rimpa Halder at the house of businessman at Nithari in Noida on the outskirts of Delhi. Koli was suffering from necrophilia (having sex with dead bodies) and also charged with cannibalism (eating human flesh).

Rimpa was first of the victims who was brutally killed on February eight 2005 and her body was found hacked. The evidence in this case was the recovery of Rimpa's clothes from the D-5 house where Koli was a domestic help. The clothes were identified by the mother of the victim. The DNA samples from Rimpa's clothes had also matched with the blood sample of her mother, father and brother. During the probe, Koli identified the buttons of Rimpa's dress.

In its chargesheet, the CBI had mentioned that Pandher was in Australia with his wife when the incident had taken place and also attached his passport details. Rejecting the CBI contention, the judge convicted both of them.

As the judge pronounced them guilty of murder and rape, Pandher and Koli reacted in opposite manner. While Pandher sobbed, Koli's face was devoid of any expression.

Pandher was found guilty under IPC sections 302, 376, 201 and 120B, whereas Koli was convicted under sections 302, 376, 364 and 511. The section 302 calls for the execution of the culprits or life imprisonment if found guilty of murder whereas, section 376 punishes a person for a term not less than seven years and maximum life imprisonment for committing a rape. Pandher was charged with causing disappearance of evidence of offence and giving false information (section 201) and hatching criminal conspiracy (section 120B).

Koli was charged with the kidnapping or abducting in order to murder (Section 364) and for attempting to commit offenses which are punishable with imprisonment for life (section 511). Koli gave his confessional statement under section 164 of Criminal Procedure Code before a magistrate in this case.

Ghaziabad court premises were turned into a virtual fortress with heavy deployment of security personnel. People from all walks of life including parents of three victims were eagerly waiting for the first judgement in the case in which 19 women and children were raped and murdered.

The small court room was full more than half an hour before the judgement was to be pronounced. Jain walked into the room at 3.55 pm after which the accused were produced in the room.

Pandher, clad in a white ensemble, looked confident as CBI did not file any charge sheet against him. Koli, wearing a grey pullover and navy blue trouser also seemed to be cool and composed. As Jain read out the judgement, Pandher could not control his emotions and broke down. Pandher's son Karanjeet Singh and wife were also present during the judgement. His wife also broke into tears while the verdict was pronounced.

Koli was party to the proceedings in a very quiet manner, probably expecting the worst.

Following is the Chronology of Events of the Nithari Serial Killing: