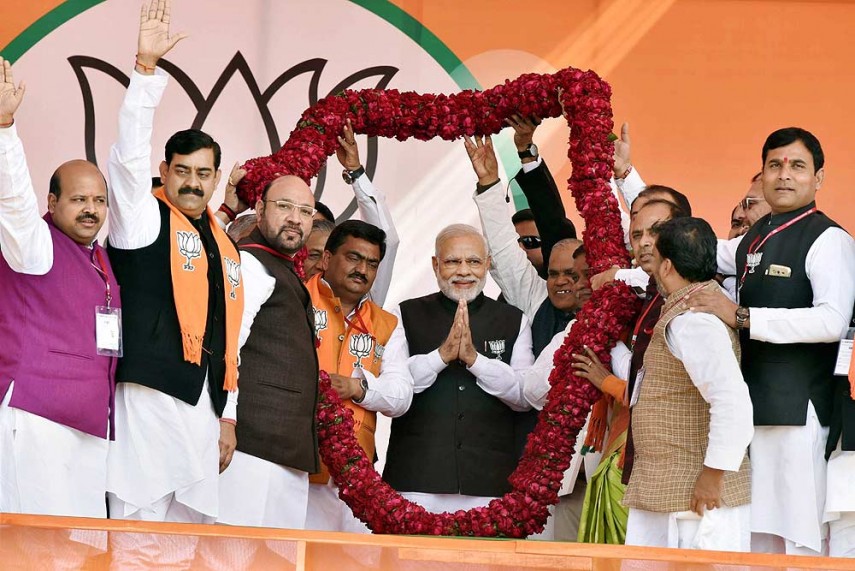 Prime Minister Narendra Modi today tore into Akhilesh Yadav government, alleging it was "sheltering" and "nursing" crime and corruption and asserted that this UP election was about ending the 14-year "exile of growth" in the state.

Addressing 'Parivartan Sankalp Rally' here on the penultimate day of campaigning for the first phase of polls, Modi said Akhilesh has disappointed those who had high hopes of him and has "destroyed" the state in last five years. He also took a dig at SP-Congress alliance, saying, Samajwadi Party had stepped in a "sinking boat".

"Is this poll about choosing a new government, or about electing a new CM? This election is about ending 14 years of exile of growth (vikas ka vanvas) in UP and replacing it with growth and prosperity," he said alluding to Ramayana.

In his nearly 45-minute address, Modi, who represents Varanasi in Lok Sabha, attacked the Akhilesh-led government on several fronts, including law and order, even as he made promises of "rectifying the wrongs" committed by the state government.

"When Akhilesh came, we felt he is young and educated and will try to do some good. 'Par nirash kar dia, paanch saalo ke andar UP ka vinash kar diya (But he has disappointed us, destroyed UP in five years."

"They keep attacking me, and accuse that I have not kept promises. I tell you, I will give answer to the public in 2019, but Akhilesh government must answer to the people as it had ruled it for the last five years.

"If you do no answer in Uttar Pradesh, who will you make it Uttam Pradesh," Modi said.

The Prime Minister also accused the SP government of "sheltering crime" and nursing "goondas" and "sitting blindfold" over corruption in the state.

"Today, women fear to venture out after dark in the state. Young girls are scared of going to schools.

"This evil has been sheltered by the ruling party leaders in the state. It is nursing the criminals.

The law and order has failed as powerful people with protection of the ruling party are controlling police in their areas," Modi alleged.

"There is corruption in jobs, poor farmers and middle-class people's lands have been snatched away. There are 40,000 complaints registered under the Arms Act," he said.

If BJP forms government in UP, Modi said, "I promise you we will form a special task force to ensure that lands looted from farmers and middle-class people would be restored."

"We have also been asking for CAG audit of irregularities in GDA but the UP governance has not agreed. Once we form a government in UP, we will ensure that GDA and other development authorities are audited," he said.

"If you have courage and good intent, then you can improve law and order in UP. It was the same government, the same staff, same offices and the same police personnel when Kalyan Singh, Rajnath Singh and other CMs from BJP ensured that criminals were in jail," Modi said.

He said this election was not a contest among parties, but a battle of "vikas" over "vinash" (growth over destruction).

The Prime Minister also took the occasion to hit out at the SP government over several plans of the Centre which have "not been adequately implemented" in Uttar Pradesh.

"We brought in a scheme whereby interviews won't be necessary for recruitment of class III and IV employees. Only the computers will tell who all would be selected and all on basis of merit. We had asked all states to implement that plan, but the UP government has locked it in files," Modi said.

He said as per the new policy, this year onward there would be no requirement of interview for Group D, C and B non-gazetted posts in central government.

"The plan was brought to end corruption in recruitment process. But, this UP government is sitting blindfold over corruption, and therefore, if you wish to root out corruption, you must also root out this corrupt (SP) government," he said.

On Pradhan Mantri Fasal Bima Yojana, Modi alleged, "UP has contributed a very low 14 per cent under this scheme compared to 50 per cent figure in some other states."

"If we form the government, we will work for more welfare of farmers on this front... UP is the highest producer of wheat yet the state government buys only 3 per cent, compared to neighbouring Haryana where the purchase is at 60 per cent.

"It is because this SP government does not want to do justice to farmers, since it is hell bent on destroying the state, it is furthering favouritism and casteism and is interested in vote-bank politics," Modi claimed.

The Prime Minister also made a veiled attack on Mayawati, saying a "favourite" government official of the BSP supremo was now "languishing in jail".

Modi, who arrived at the venue around 2 PM, in a special chopper, was greeted with loud cheers, as enthusiastic crowd chanted his name and left soon after his address.

The polling in the state will be done in seven phases between February 11 and March 8 and counting of ballots will take place on March 11.

As part of the seat-sharing agreement, Congress will contest 105 seats and Samajwadi Party 298 seats, out of the 403 Assembly seats in Uttar Pradesh.