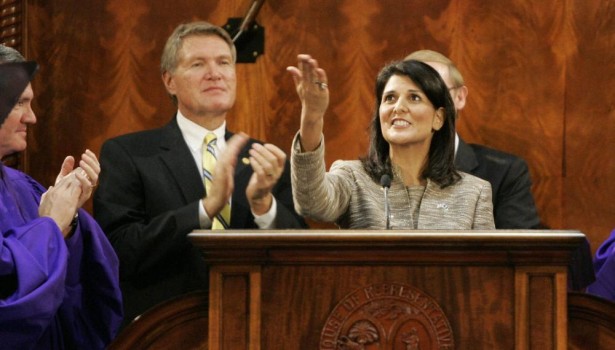 44-year-old Haley's elevation to this position came amid reports that she is being considered for the position of secretary of state by President-elect Donald Trump.

After the November 8 general elections, Republican Governors are now in charge of 33 States, something that has not happened in 94 years.

Wisconsin Governor Scott Walker was elected Chair and Haley, the daughter of Indian immigrants, Vice Chair of the Republican Governors Association (RGA) for the year 2017.

"Haley was pleased to meet with President-elect Trump. They had a good discussion, and she is very encouraged about the coming administration and the new direction it will bring to Washington," Rob Godfrey, her deputy chief of staff said.

"Haley's strong leadership will be a major asset to the RGA in the upcoming year. She has worked tirelessly for the people of South Carolina, to make every day a great day for her constituents, and that is just the kind of determination the RGA expects of its leaders.

"Her experience and insight will be integral to the success of our governors and candidates as we enter 2017," outgoing RGA chair Governor Susana Martinez said.

Haley said Republican governors are making a difference, delivering results to the people of their states, and the party's record-breaking majority shows that the RGA knows what it takes to elect effective leaders.

"I look forward to working with Governor Walker, a trusted friend and colleague, to recruit strong candidates and build on RGA's historic progress in the months ahead," she said.

In an op-ed on CNN, South Carolina's popular columnist Issac Bailey wrote Haley is perfectly positioned to do what many believed Hillary Clinton would have.

"#NeverTrumpers have reason to admire her. Trump supporters have reason to embrace her and she has an opening with voting populations who have long been sceptical of the GOP (Republican party) and are now even more so because of Trump. Nobody should be mocking her now. Secretary of state or not, Haley could be a future political titan in a political party that finds itself with unprecedented levels of national power and internal chaos," Bailey wrote.

Haley could give Trump something to brag about and his supporters, desperate to deny the bigotry upon which their hero rose to national political prominence, something to point to, his willingness to appoint a woman from a minority group who did not cow to him during the election cycle, Bailey added.