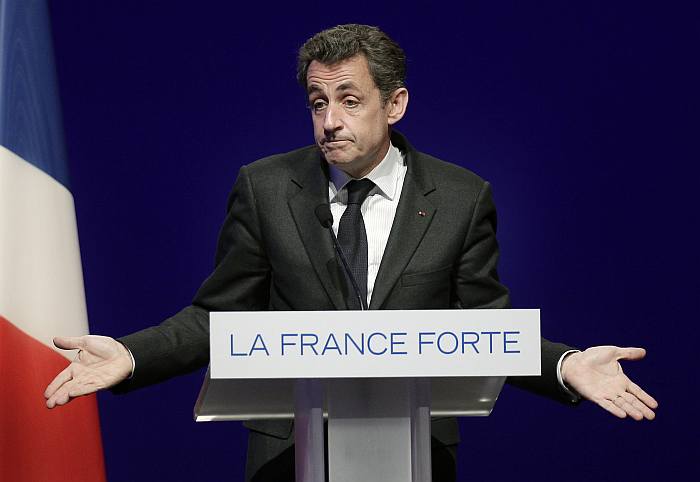 A French secret serviceman shot dead Libya's former strongman Col Muammar Gaddafi and not a lynch mob of rebels as he lay trapped and cornered in a sewage pipe in his home town of Sirte.

The French secret agent is said to have infiltrated a violent mob which had encircled the Libyan leader on October 20, 2011, in a sewage pipe in his home town, and shot him in the head, the Daily Mail reported.

Quoting diplomatic sources in the North African capital, the Mail said the motive apparently was to stop Gaddafi being interrogated about his highly suspicious links with Nicolas Sarkozy, who was the President of France at that time.

The paper said Sarkozy who once welcomed Gaddafi as the "Brother leader" during a state visit to Paris was said to have received millions of dollars from the Libyan despot to fund his election campaign in 2007.

Sarkozy, the paper said, was not the only Western leader to have close links with Gaddafi and claimed that former British Prime Minister Tony Blair visited Gaddafi regularly and was helping to facilitate multi-billion pounds business deals.

Italian newspaper Corriere della Serra also reported that the French agent was acting on the express orders of Sarkozy.

"Since the beginning of NATO support for the revolution, strongly backed by the government of Nicolas Sarkozy, Gaddafi openly threatened to reveal details of his relationship with the former president of France, including the millions of dollars paid to finance his candidacy at the 2007 elections," the paper said.

The reports of involvement of French agents in the death of Gaddafi were corroborated by Mahmoud Jibril, who led the interim government in Libya after the ouster of Gaddafi.

Jibril told an Egyptian TV that "it was a foreign agent who mixed with the revolutionary brigades to kill Gaddafi."

The Daily Mail quoted diplomatic sources in Tripoli as saying "Sarkozy had every reason to try to silence the Colonel and as quickly as possible."

The new revelations said that Gaddafi had been tracked through his satellite telecommunications system as he talked to Syrian President Bashar Al-Assad.

NATO experts were able to trace the communications traffic between the two Arab leaders, and so pinpoint Gaddafi to the city of Sirte, where he was murdered on October 20.

NATO jets shot up Gaddafi's convoy, before rebels on the ground dragged Gaddafi from a drain where he was hiding and then subjected him to a violent attack which was videoed.

In another sinister twist to the story, a 22-year-old who was among the group which attacked Gaddafi and who frequently brandished the gun said to have killed him, died in Paris last Monday.

Ben Omran Shaaban was said to have been beaten up by Gaddafi loyalists in July, before being shot twice. He was flown to France for treatment, but died of his injuries.

Sarkozy, who lost the presidential election in May, has continually denied receiving money from Gaddafi.

It was earlier believed that Gaddafi was shot and killed by rebels in his hometown, Sirte. While the UK had sought probing into his death, Russian President Vladimir Putin had alleged US involvement in the killing.