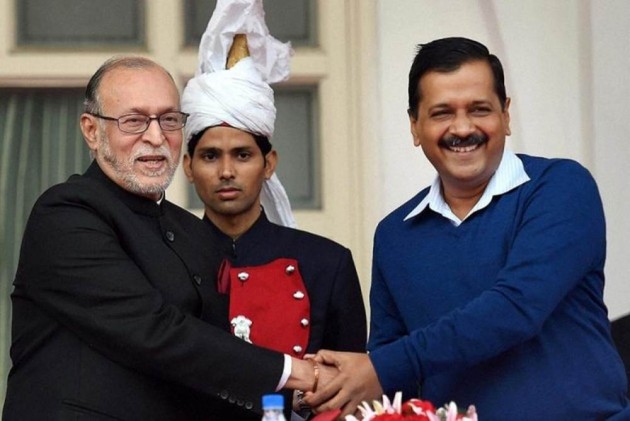 Lt Governor Anil Baijal today emphasised putting in place an implementable parking policy for the national capital at the earliest after he conducted an on-ground reality check of cleanliness status in south Delhi's Saket area.

Baijal's visit, the first by him after assuming office, comes at a time when thousands of sanitation workers of EDMC are on an indefinite strike demanding payment of their salaries due for three months (October-December).

Vowing to conduct regular inspections, Baijal said keeping the city and its public spaces clean and ensuring organised parking will be among his priorities.

The LG's inspection is considered to be a part of strict implementation of the 'Swachh Bharat Mission' in Delhi.

"The Lt Governor emphasised on having an implementable parking policy at the earliest in the capital with active participation of all stakeholders like DDA, Transport Department, PWD, municipal corporations and police," an official said.

Baijal has also directed the Public Works Department (PWD) to beautify the area and open spaces under flyovers across the city.

The LG has appointed South MCD commissioner as the nodal officer for coordination between various agencies in his jurisdiction for cleanliness and waste disposal-related issues.

After the inspection, Baijal held a meeting with the officers of Delhi Police, DDA, MCD and other agencies concerned and also emphasised on proper solid waste management, removal of garbage and debris from pavements and public spaces.

"LG also directed that the concerned agencies will ensure complete removal of malba from public spaces before releasing payment to the contractors of civil works. This should be a built-in condition of the contracts. In case the contractors concerned do not remove the malba/solid waste, the same would be removed at his risk and cost," a statement issued by the LG office said.

After taking charge as the Delhi LG on December 31, Baijal had said he would put in his best efforts on improving law and order situation, women safety, traffic congestion, besides strengthening infrastructure and civic amenities in the city.

"Delhi is a megapolis which has several problems like women safety, law and order, huge population, infrastructure, civic agencies and congestion. We all know about these problems. We will work with elected government to solve them," he had said.

"Thanks Sir! Your active involvement, even on Sunday, in Delhi's sanitation, law-order, governance would help Delhi to improve fast," Sisodia tweeted.

Baijal's predecessor Najeeb Jung and the Arvind Kejriwal government had been at loggerheads on a range of issues, including transfer and posting of bureaucrats.