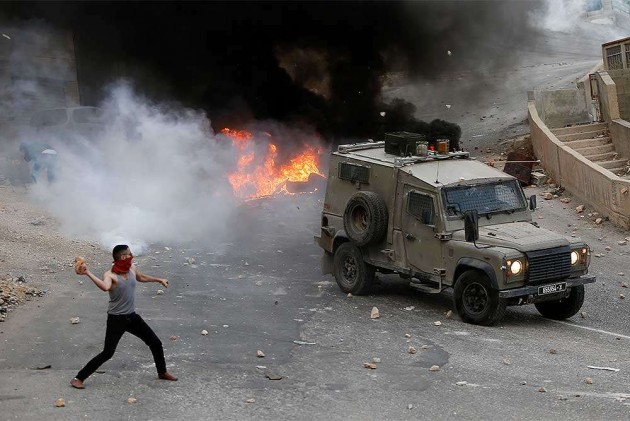 New violence rocked Israel and the West Bank, with three stabbings and an Arab shot dead by police, as Prime Minister Benjamin Netanyahu warned Israelis to be on maximum alert against "terrorism."

In the West Bank, meanwhile, men thought to be undercover Israeli police opened fire on a group of Palestinian stone-throwers they had infiltrated, wounding three of them.

Israeli and Palestinian officials reportedly met for security talks in the West Bank Tuesday evening, and there were calls yesterday from the European Union for calm and a return to political dialogue.

In the meantime, however, Netanyahu had a stark message for his citizens.

"Israeli civilians are at the forefront of a war against terrorism and must also be on maximum alert," he said yesterday after visiting a Jerusalem police headquarters.

"The goal of terrorism is to spread fear, and the way to defeat it is to maintain composure and resilience on both a national and personal level," his office quoted him as saying.

Netanyahu, who postponed a visit to Germany to tackle violence that has raged for three weeks, added: "We have known worse times than this, and we will overcome this new wave of terror by maintaining our determination, responsibility and unity."

President Reuven Rivlin has warned that Israel and the Palestinians are "sitting on a volcano".

In a potential sign of efforts to ease tensions, however, a report in the Haaretz daily said Netanyahu had ordered police to bar ministers and lawmakers from visiting the Al-Aqsa mosque compound in Jerusalem.

Blocking Israeli politicians from the compound would be aimed at lowering tensions and reducing the level of Palestinian violence. It is the third-holiest site in Islam and the most sacred in Judaism.

Muslims fear Israel will seek to change rules governing the site, which allow Jews to visit but not pray to avoid provoking tensions.

Israel had already lifted age restrictions from Wednesday on Muslims praying at the compounds.