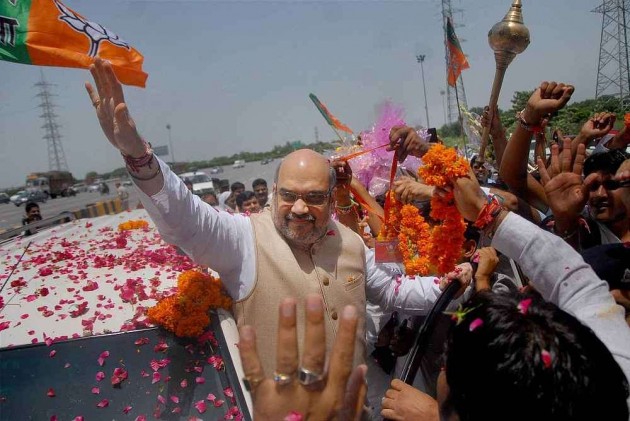 A mix of youth and experience, the new team includes 11 Vice Presidents, eight General Secretaries and 14 Secretaries, besides 10 party Spokespersons, five of them new.

A significant part of today's exercise was the dropping of Varun Gandhi, Lok Sabha member from Sultanpur. This comes days after his mother and Union Minister Maneka Gandhi pitched for his projection as the party's Chief Ministerial candidate in Uttar Pradesh.

Sources said the decision was conveyed to Varun a few days ago with a hint that he would be free to campaign in Uttar Pradesh, where the party is hoping to form its own government in the next assembly elections due in May 2017.

Also he has not included in the new team because his mother is already part of the Modi Cabinet, sources said.

Yeddyurappa, who returned to the party just before the Lok Sabha polls after he was earlier forced to quit as chief minister following corruption charges, is among the 11 Vice Presidents in Shah's new team. Former Union Minister Mukhtar Abbas Naqvi has been retained as Vice President.

"The new team reflects a mix of youth vigour and experience, with representation to regions and social classes," said party Spokesperson Sudhanshu Trivedi.

He said the new team will act as a bridge between the Narendra Modi dispensation and the people as it will focus on conveying the message of the work done by the government.

The team has a mix of party workers from across the country, including representation from poll-bound states of Maharashtra, Haryana and Jharkhand. The team also includes five OBCs, six women and has representation from SCs and STs as well. 80 per cent of Shah's team are below the age of 60.

Shah's new team has 14 secretaries. Shrikant Sharma, who heads the media unit of the party, is one of the new Secretaries.

Siddharth Nath Singh, who was co-incharge of West Bengal with Varun Gandhi, where the party registered some success in the Lok Sabha polls and increased its vote bank, has been retained as Secretary.

Arun Jain will continue to be the party's office secretary in the new team.