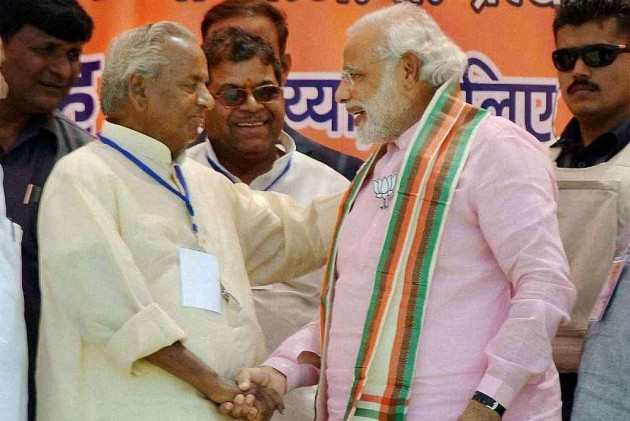 Gujarat Speaker Vajubhai Vala has been appointed Governor of Karanataka, where H R Bharadwaj had completed his tenure recently, while former Union Minister C Vidyasagar Rao will take the place of K Shankaranarayanan, who quit as Governor of Maharashtra on Sunday after he was shunted to Mizoram.

71-year Mridula Sinha, former President of BJP's Mahila Morcha, was appointed as Governor of Goa in place of B V Wanchoo who was among those asked to quit after the change of guard at the Centre.

According to a Rashtrapati Bhavan communique, 82-year-old Kalyan Singh will take over in Jaipur in the vacancy caused by the retirement of Margaret Alva earlier this month.

A two-time Chief Minister, Singh was was convicted for a day by the Supreme Court on October 24, 1994 for violating the commitment made to the Supreme Court on ensuring the safety and protection of the Babri Masjid.He went out of BJP on two occasions but returned to its fold.

76-year-old Vala, who will take over in Bangalore, is an old trusted aide of Modi who served in his Government as Finance Minister before he was elected as Speaker of Gujarat Vidhan Sabha in January last year.

Rao, who had served as Minister of State for Home in the Vajpayee government, hails from newly carved out Telengana state.

A lawyer by profession, 69-year-old Rao was elected to Andhra Pradesh Legislative Assembly three times and was the leader of Bharatiya Janata Party in the assembly.

The Rashtrapati Bhavan communique said the appointments will take effect from the dates the incumbents assume charge of their respective offices.

A Rashtrapati Bhavan communique said the resignation of Shankaranarayanan, who was transferred as Governor of Mizoram, has been accepted.

Vinod Kumar Duggal, Governor of Manipur, will continue to hold the additional charge of Mizoram, until regular arrangement for the office of the Governor of Mizoram is made, the communique said.

Earlier, the NDA government had sacked Mizoram Governor Kamla Beniwal, who had served in Gujarat and had a running battle with Narendra Modi when he was the state's Chief Minister.

Five other Governors -- M K Narayanan (West Bengal), Ashwani Kumar (Nagaland), B L Joshi (UP), B V Wanchoo (Goa) and Shekhar Dutt (Chhattisgarh) had put in their papers apparently after they were telephoned by the Union Home Secretary.

While veteran Congress leader Jagannath Pahadia completed his tenure as Governor of Haryana last year, Uttarakhand Governor Aziz Qureshi had challenged Modi government's moves to ease him out of office, bringing the controversy over removal of UPA-appointed Governors under judicial lens.