On Board President's Special Flight, 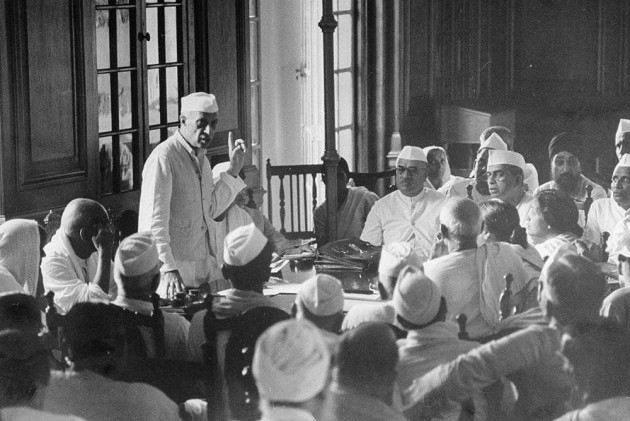 Jawaharlal Nehru's message of peaceful coexistence has eternal relevance and is not "bound in a timeframe," President Pranab Mukherjee said in remarks coming in the backdrop of questions being raised about the legacy of the country's first Prime Minister.

The President told journalists on board his special flight from Tel Aviv to New Delhi last night, "certain messages and principles have relevance for a very very long time. Peaceful coexistence is one such message and it is not to be bound in a timeframe."

Mukherjee was also asked about his remarks in Israel that religion should not be the basis of a state with a journalist pointing out that Israel and Pakistan were based on religion.

"Pakistan was created out of India on the basis of religion in 1947. A large chunk had come out of Pakistan and become an independent sovereign state within 25 years( Bangladesh)," he said, ading that this is the point he had made to Israeli parliamentarians.

The President, who was in the region at the time of escalating tensions, was asked why he had not specifically commented on the Israel-Palestine conflict. He had been criticised in Israel for not denouncing "Palestinian terrorism".

He replied, "I know that different countries have different relations. It is not the job of another country to make any comment on that. This is international diplomacy and courtesy."

He pointed out that India had established fullfledged diplomatic relations with Israel nearly 23 years ago but continued to maintain its "principled position" with regard to Palestine.

The President said that in his discussions with Israeli and Palestinian leaders he had got a sense that both sides wanted to resolve the issues betwween them.

Mukherjee said his visits to the three countries have

have helped deepen India's mutually beneficial relations with them.

"I return with the conviction that the governments of all the three countries are keen to take relations with India to much higher levels. India will actively work towards enhancing our partnership with Jordan, Palestine and Israel in the days to come," he said.

The President also said that in his public remarks during his visit he had expressed distress at recent incidents of violence, condemned all forms of terrorism and called for peaceful resolution of all disputes.

Noting that his trips to Jordan, Palestine and Israel were first ever visits by an Indian President, he said they reflected the importance that India placed on enhancing its partnership with countries of this region, which is our "extended neighbourhood".

Mukherjee said he took the opportunity to brief the leaderships of these countries on the initiatives of the Indian government in various fields and to explore possiblities of enhanced cooperation in bilateral, regional and international context.