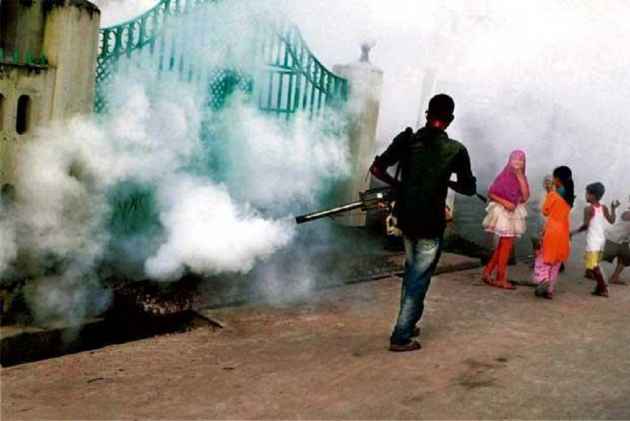 The New Delhi Municipal Council has slapped several notices on the Rashtrapati Bhavan after mosquito-breeding was observed at many pools of stagnant water on the sprawling complex.

The NDMC has so far issued over 1,100 notices -- and 13 challans -- to various buildings in the VVIP Lutyens' zone, which were found to be "breeding spots" for mosquitoes by its surveillance team.

"Every year, we form a surveillance team whose inspection leads to notices being issued by the NDMC. If the situation doesn't improve by the time of second inspection, challans are issued," a senior official of NDMC's health department said.

"We have issued several notices to various complexes and residential quarters in the President's Estate over mosquito breeding," the official added.

Last year, the NDMC had issued over 80 notices to the President's Estate after "heavy" mosquito-breeding was found at various places on its sprawling campus, he said.

The number of notices issued to the President's Estate was 125 in 2015.

However, the exact number of notices issued to the Rashtrapati Bhavan this year was not immediately available.

Among other important buildings which have been issued notices are the defence ministry's and the Delhi high court's.

According to the latest municipal report on vector-borne diseases, at least 70 cases of dengue and 135 of chikungunya have been reported in Delhi till June 10.