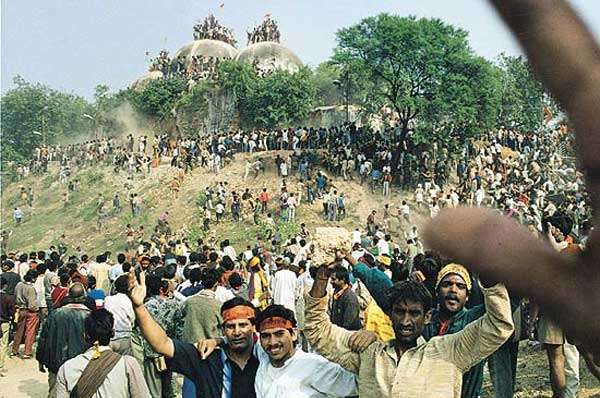 Raking up the Ram temple issue, BJP MP Vinay Katiyar who was the face of the Ayodhya movement of 1990s, today said the Modi government should "move to resolve" the matter without waiting for the Supreme Court verdict.

He said the government should address the issue either through legislation or talks, fulfilling the BJP's promise.

"Without waiting for the verdict of Supreme Court, the government should make a move to resolve the issue either through talks or by bringing a legislation," Katiyar told PTI.

"The Ram Janmabhoomi issue is a burning issue and no government can ignore it, be it in a majority or not. It is a big issue, not only for 'Ram Bhakts'. It is not a difficult task for the government to resolve it and if it wants, it can start negotiations and it will become easier," he said.

He said that earlier there was no court verdict in "favour" of the Ram Janmabhoomi issue and now that it is there and hence it will be easier.

"This will clear doubts from the minds of the people about our intentions and also expose those who are indulging in propaganda that we are not serious over the issue," he said.

The BJP leader, however, stressed that all problems can be resolved through dialogue, which he said should continue for the decades old dispute.

Katiyar, who had been in the forefront of the temple movement in 1990s, said even though the Modi government did not come to power on this issue, it was as important for BJP's voters as country's development.

When his attention was drawn to growing disenchantment of Sangh elements over the delay, the BJP MP warned that their anger might cross all limits if the matter was kept on the backseat any longer.

Union Home Minister Rajnath Singh as well as BJP President Amit Shah had earlier said that the government was not in a position to address the issue through legislation because of lack of strength in Rajya Sabha.

Congress MP Hussain Dalwai dismissed Katiyar's talk as a "non-issue", saying the BJP leader always rakes up Ram temple issue and is trying to divide society by making such remarks.

He said Prime Minister Narendra Modi should take note that all his appeals to such leaders for not making controversial remarks are going unheeded as there is no action against such elements.

"Instead of development, they are raking up the Ram temple issue and are trying to divide society. I appeal to Prime Minister Modi. He told leaders not to raise such issues but there is no action against anyone. These are non-issues and the biggest issue that Modi raised during election was 'sabka saath, sabka vikas'," he said.

JD-U MP Ali Anwar Ansari said there are many people like Katiyar in BJP who keep raising such controversial issues to keep such matters alive.

"They are making such statements and in a way are in agreement that some people should keep such issues that divide society alive. This is the way they work," he said.

At the Congress briefing, party spokesman Abhishek Singhvi ridiculed Katiyar for his statements and said BJP remembered Lord Ram only at the time of elections whether in a state or at the Centre.

"Ram is forgotten otherwise... A month before election, he is remembered, elevated to a pedestal and a month after election, it is parroted that we have nothing to do about it," Singhvi said.

He said since the Assembly polls in Bihar are nearby, Katiyar is saying that Ram temple cannot be ignored by any government.

Singhvi also made light of HRD Minister Smriti Irani's attack on Congress Vice-President Rahul Gandhi on the issue of farmers. Taking a dig at her, the Congress spokesperson said if Irani is so concerned about farmers in Amethi and elsewhere, she should impress upon the government to change its "anti-farmer" policies.