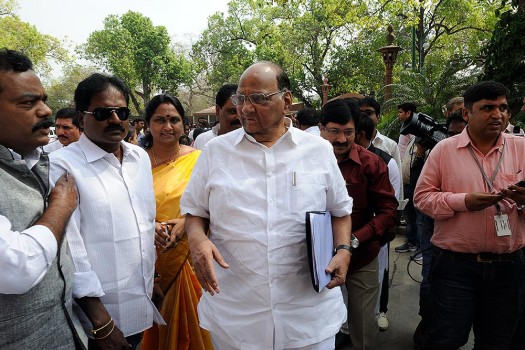 NCP President Sharad Pawar today asserted that his party will not bail out the BJP Government in Maharashtra if it is reduced to minority and dared the Shiv Sena to withdraw support to it.

Replying to questions on Uddhav's remark that he doesn't trust the NCP when it says it will not support the BJP government if Shiv Sena pulls out, Pawar said he does not require a certificate of trust from him.

Uddhav, which has snapped ties with BJP for the February 21 civic polls, has said he will take a decision on continuing in the Maharashtra government after election results are announced on February 23.

The Maratha strongman said two years ago his party had announced support to BJP (which won maximum seats) since no party had got a majority and NCP did not want political instability immediately after the 2014 Assembly polls.

"The BJP had formed Government for the first time and people thought the party should be given a chance to perform. But after two years, people have realised that BJP is no good. Hence, there is no question of supporting the Government," Pawar said.

The former Union Minister claimed the BJP will not have an upper hand in the civic polls and alleged the central leadership of the party has been "plotting" to weaken the Shiv Sena.

Pawar said Chief Minister Devendra Fadnavis' poll campaign is centred around personal attacks on Uddhav, "the Shiv Sena had to retaliate. If this continues and the Shiv Sena withdraws support, there will be mid-term polls. But, there is no clarity yet on the Shiv Sena stand."

He said the Sena's demand for loan waiver to farmers in the state is nothing but an "escape route" to avoid quitting the over two-year-old dispensation.

"I don't think Fadnavis will have a problem in announcing sops for farmers to keep his Government stable," the NCP chief said.

Pawar said he had predicted two years ago that the Sena-BJP alliance will hit a rough patch during the Mumbai civic polls and "we are facing a similar situation now".

He said the NCP has a limited presence in Mumbai and hence will not benefit from the Sena-BJP fight in the state capital.

"NCP support is mostly among farmers, rural masses and Marathi-speaking people. In Mumbai, the Marathi space is already with the Shiv Sena. We need more time to create a space for ourself in the city," he added.