NCP Slams Ultimatum on Cong Over Seat-Sharing in Maharashtra 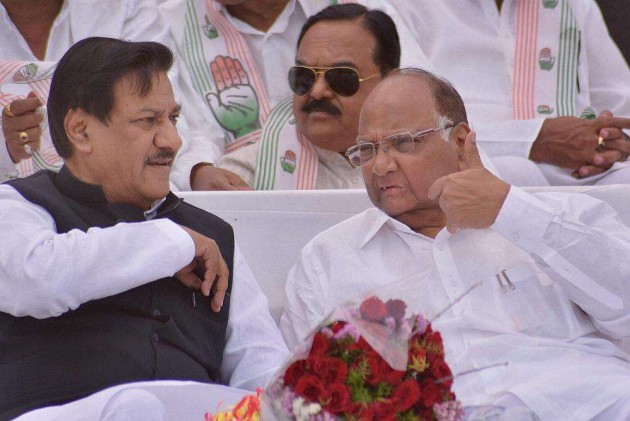 Print
A
A
A
increase text size
Outlook September 20, 2014 20:06 IST NCP Slams Ultimatum on Cong Over Seat-Sharing in Maharashtra

Going on the offensive, NCP today gave Congress a day to revert on the issue of seat-sharing for the October 15 Assembly polls in Maharashtra, saying it will "wait a day longer".

"The filing of nominations has begun. We can wait for a day longer for Congress' response on our proposal on quantum of seats," senior NCP leader Praful Patel told reporters but clarified it was not meant to be an ultimatum.

"We want some official intimation from them by tomorrow failing which I will meet CM Prithviraj Chavan on Monday morning," he said.

Asked if NCP would go it alone if need be, Patel said," this option is open for all parties."

There has been no response from Congress to our demand for 144 seats despite top leaders of the two parties meeting weeks ago, Patel, a confidante of NCP chief Sharad Pawar, said.

Pawar had met Congress President Sonia Gandhi on August 6 and said the two parties would go to the hustings together.

"We received a proposal that NCP should contest 124 seats, 10 more than what we contested in 2009 polls. We want to clarify that 124 is the number of seats we contested in 2004," Patel said, adding the old formula does not apply now after NCP got more Lok Sabha seats than the Congress in Maharashtra.

In their worst-ever drubbing in Maharashtra in Lok Sabha polls, NCP won four seats and Congress just two as the alliance, in power in the state for 15 years, was decimated by BJP-Shiv Sena-led 'Mahayuti', a rainbow alliance also including smaller parties like RPI(A) and Swabhimani Shetkari Sanghatana.

"NCP wants the alliance to continue. This sentiment was expressed by both Sharad Pawar and Sonia Gandhi when they met in Delhi. It is unfortunate that we have not been able to conclude seat-sharing talks even after so many weeks," he said.

Earlier in the day, Maharashtra Congress chief Manikrao Thakre had said the alliance could be in trouble as there was no positive response so far to Congress' proposal.

Sharad Pawar's nephew and Deputy Chief Minister Ajit Pawar had said NCP's demand for 144 seats was a justified as it had more Lok Sabha seats in Maharashtra than Congress.