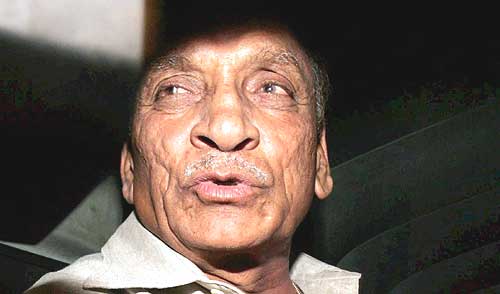 NCP leader and Lok Sabha MP Padamsinh Patil has been booked under section 302 (murder) and section 120 B (criminal conspiracy) of IPC.
PTI Photo

outlookindia.com
-0001-11-30T00:00:00+0553
Senior Nationalist Congress Party (NCP) leader and Lok Sabha MP Padamsinh Patil was today arrested by the Central Bureau of Investigation (CBI) for his alleged involvement in the 2006 murder of Maharashtra Congress leader Pawanraje Nimbalkar and his driver and remanded in the agency's custody till June 14 by a court.

Patil "has been booked under section 302 (murder) and section 120 B (criminal conspiracy) of IPC. He has been remanded to our custody till June 14," CBI counsel Ijaz Khan said after the 69-year-old MP was produced in a court in Panvel in Navi Mumbai.

Patil was detained last night after two of the arrested accused -- Parasmal Jain and Mohan Shukla -- allegedly named him in the June 3, 2006 case in which Nimbalkar and his driver were shot dead in a car at Kalamboli in Navi Mumbai.

The CBI lawyer told the court that "both Jain and Shukla had named Padamsinh Patil as the one who paid 'Supari' (contract) of Rs 30 lakh and ordered killing of Nimbalkar." The probe agency said Nimbalkar, also a cousin of Patil, was killed due to business rivalry.

The CBI took over the investigation last year following a Bombay High Court directive which came on a petition by the family of Nimbalkar which alleged that the police have failed to properly probe the case.

As he was taken to court, Patil claimed, "I am innocent. This is all wrong... What is happening. I am being falsely implicated."

CBI Joint Director Rishiraj Singh said, "We have informed the Lok Sabha Speaker of his involvement and arrest in the conspiracy and double murder case." This has been done under the rules of procedure of Lok Sabha as the House is in session, he added.

The arrest of Patil has come as a big embarrassment to the NCP, a constituent of the ruling UPA at the Centre, since he is a senior leader who has been elected from the Osmanabad seat in Maharashtra in the recent Lok Sabha polls.

Patil, a relative of party chief Sharad Pawar, was elected to the state assembly for seven consecutive terms from 1978 but was forced to take a backseat in 2004 after winning by a mere 484 votes. NCP replaced him with son Jagjitsingh in the state ministry.

The arrest which comes just four months before the assembly polls in Maharashtra, has put the NCP in the backfoot, even as Pawar steered clear of making any comment and only said that the "law will take its own course" in the case. He declined to make any further comment, saying that he did not want the inquiry process to be affected in any way by making any remark.

Maharashtra Chief Minister Ashok Chavan said, "Investigations are on. I don't want to comment on it. I don't think it will affect Congress-NCP relations".

Earlier in the day, Patil, a former Maharashtra Minister, was taken to the state-run J J Hospital after he complained of chest pain and low blood pressure.

The CBI has so far arrested four persons -- Jain, Dinesh Tiwari, Shukla and Satish Mandade -- in the case. They are in CBI custody till June 9.

An emotional Omraje, Nimbalkar's son, said, "It has been more than three years that I have been fighting for justice. I will get justice for my father's death only when those involved in his murder get stringent punishment."

The situation in the district in Marathwada region of Central Maharashtra was tense but under control, police said.

BJP and Shiv Sena activists also staged a blockade on Mumbai-Hyderabad National Highway Number 9 near Umerga demanding the resignation of Padmasingh Patil and his son Rana Jagjit Singh Patil, who is minister of state for industries in Ashok Chavan's cabinet.

Meanwhile, Shiv Sena showered praise on the CBI for cracking the murder case.

Shiv Sena MP Sanjay Raut said, "The Nimbalkar case was earlier probed by the state police. But it was unable make any headway in the case. Later, the case was transferred to CBI which has done a good job and results are here".

"It also exposes that the state police is working under pressure of the ruling government. That is the reason why they could not make headway in the case," Raut alleged.

Noted social activist Anna Hazare said that the arrest of Patil has boosted the faith of common people in judiciary.

Hazare, whose supari (contract) was given along with that of Nimbalkar, which the killers had reportedly refused, held state government responsible for not taking any action against Patil.

The social activist also alleged that Patil had threatened the counsel in Nimbalkar murder case.