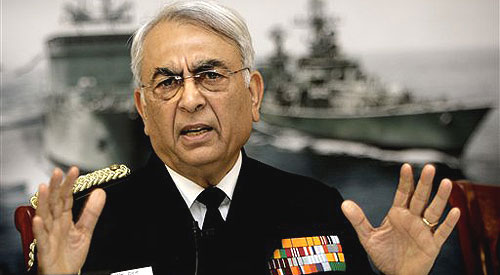 outlookindia.com
-0001-11-30T00:00:00+0553
In the backdrop of the Mumbai attacks having exposed the vulnerability of Indian coastline, Navy Chief Admiral Sureesh Mehta today said cargo containers could be used to transport nuclear weapons.

"Today, 70-75 global cargo is containerised. It is acknowledged that the container is the most likely means for terrorist organisations to illegally transport a nuclear weapon and, hence, there is a serious concern about container security," he said while inaugurating a seminar organised by the National Maritime Foundation here.

He said entry of nuclear weapons through containers was only one aspect of the concern of security agencies and these should be scanned thoroughly to ensure 100 per cent security.

"Nuclear is only one aspect of it. We have to ensure 100 per cent security at ports by scanning them (containers) under X-ray machines. Every country has to accede to it that wherever, whichever port the container leaves from, that country certifies that this container is fully secure," Mehta said.

He said maritime regions were less regulated as compared to traffic on land.


Continue FREE with Ads Pay Rs. 1 to Read Without Ads
READ MORE IN:
Sureesh Mehta National
Next Story : I Have Tried to Create My Own Space: Irrfan Khan
Download the Outlook ​Magazines App. Six magazines, wherever you go! Play Store and App Store