Navin Chawla to be Next CEC 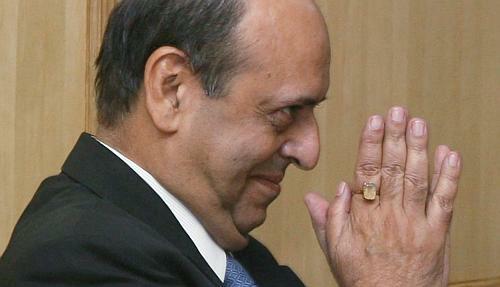 "The President has approved the appointment of Navin Chawla as the Chief Election Commissioner with effect from April 20 on completion of the tenure of N. Gopalaswami," a Rashtrapati Bhavan communique has said.

Chawla, who will be taking over in the midst of the five-phased Lok Sabha elections, will oversee four phases of the polls.

The elevation of Chawla, who was appointed as Election Commissioner on May 13,2005, comes after a controversy triggered by Gopalaswami's recommendation to the President for his removal from office for alleged 'partisan' functioning.

Chawla has been elevated to CEC's post on the advice of the government which had rejected Gopalaswami's plea for his removal, saying there was no merit in the allegations against the Election Commissioner.

The CEC, a Constitutional post, enjoys a term of six years or till the age of 65 years, whichever is earlier.

Chawla has earlier served in various capacities in the government during his chequered career, the last being Secretary in the Ministry of Information and Broadcasting.

He has also served as Secretary to the Union Public Service Commission (UPSC).

Chawla has authored a number of books, including an authorised biography of Mother Teresa which became popular internationally.

Chawla is also a recipient of the Italian government's Mazzini Award, instituted in honour of writer Giuseppe Mazzini, for his contribution to promote ties between India and Italy.

After Gopalaswami's retirement, the government will have to appoint a third Election Commissioner.

Continuance in EC Challenged in SCMeanwhile, Chawla's continuance as an EC has been challenged in the Supreme Court which has decided to hear a petition seeking a direction for implementation of recommendations of Gopalaswami for his removal.

The petition filed by the United Communist Party of India (UCPI), a registered political party, was mentioned before a Bench headed by Chief Justice K.G. Balakrishnan which decided to hear it on March 20.

The petition, which was mentioned by advocate Sugriv Dubey, said the allegations made by the CEC in his recommendations to the President should be examined and verified by the apex court as otherwiswe it would erode the impartiallity of the Election Commissioners.

The UCPI said the CEC has listed several instances of alleged wrong doings by Chawla in his 90-page recommendations to the President for sacking him which also included leaking of election dates and showing partiallity to a political party.

Chawla's Appointment Unfortunate: BJPTerming the appointment of Chawla as the CEC as "unfortunate", BJP has said the move was an affront to Indian democracy.

"The appointment (of Navin Chawla) is an affront to the Indian democracy. It is unfortunate that he has now been appointed as the Chief Election Commissioner," party General Secretary Arun Jaitley told reporters.

He (Chawla) comes to this office with a whole baggage of history of his past and recent conduct, he added.

"The onus on him to show that he is politically not attached (to Congress) is going to be very heavy. We will continue to watch the situation very closely," Jaitley said.

He, however, declined to comment if the BJP leadership was of the opinion that the presence of Chawla as CEC could influence the election results saying, "I have nothing to say more than this at this moment."

He, however, said that the option of going to the court was open for the party on the issue. "All our options are open and we would announce it at an opportune time," Jaitley said.

BJP-led NDA had been mobilising support against Chawla since he was appointed as EC, alleging his official conduct of being biased to Congress.