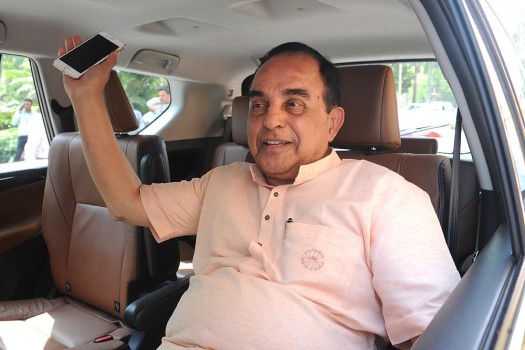 A Delhi court today granted three weeks' time to Congress president Sonia Gandhi, its vice president Rahul Gandhi and four others to respond on a plea of BJP leader Subramanian Swamy seeking certain documents from the party in the National Herald case.

Metropolitan Magistrate Lovleen gave time till July 22 to them after their counsel submitted that they have not received a copy of the application of Swamy, who has filed a private criminal complaint.

The court considered the plea of the Congress leaders and directed Swamy to hand them over a copy of the application.

Swamy, in his complaint, has accused the Gandhis and others of conspiring to cheat and misappropriate funds by paying just Rs 50 lakh through which the Young Indian Pvt Ltd (YI) obtained the right to recover Rs 90.25 crore that the Associate Journals Limited (AJL) owed to the Congress.

The Gandhis and the other accused -- AICC members Motilal Vora and Oscar Fernandes and Suman Dubey and Sam Pitroda -- have denied the allegations levelled against them.

Swamy has sought documents from the AJL including a copy of the bank statement filed with the registrar of companies (ROC), the minutes of the meeting in which decision to convert the loan into share capital was taken, the balance sheet, the profit and loss account with the auditor's report in the year in which the loan was granted.

The documents sought from the Congress party include the minutes of the meeting of the Congress Working Committee authorising the loan waiver from the AJL to the YI and a copy of the loan agreement between the Congress and the AJL.

The court had summoned the accused persons, besides the YI on June 26, 2014.

On December 19, 2015, it had granted bail to Sonia, Rahul, Vora, Fernandes and Dubey, who had appeared before it pursuant to summonses. Pitroda was granted bail on February 20, 2016 when he had appeared in the court.

Sonia, Rahul, Vora (AICC treasurer), Fernandes (AICC general secretary), Dubey and Pitroda were summoned for the alleged offences of dishonest misappropriation of property, criminal breach of trust and cheating, read with criminal conspiracy of the IPC.