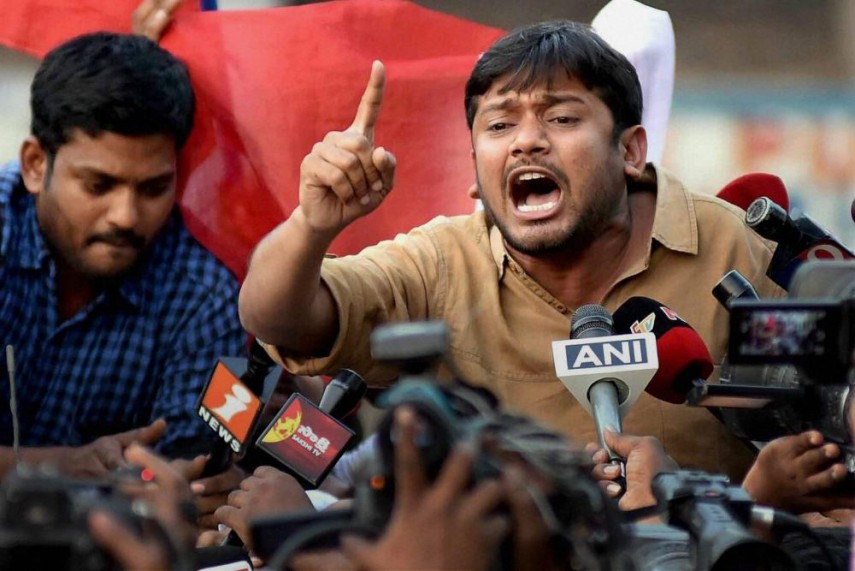 Taking on RSS, Jawaharhal Nehru University students' union president Kanhaiya Kumar today said Nagpur was the land of B R Ambedkar and not that of RSS, and "Sangh was not the Parliament".

Kanhaiya, who delivered a speech here after paying tributes to Ambedkar on his 125th birth anniversary, had a chappal thrown at him during the speech by an ABVP worker, which missed its target.

In his speech, he accused the NDA government of attacking the democratic set-up in the country and said there was a direct assault on the Constitution authored by Ambedkar.

"The Modi government made some poll promises... But now it is fast forgetting them and backtracking.

"This is the land of Dr Babasaheb Ambedkar, known as 'Deekshabhoomi' (Deekshabhoomi is the place here where Ambedkar and his followers converted to Buddhism) and not a Sangh-bhoomi," he said, in a dig at the RSS whose headquarters is in Nagpur.

"Sangh is not the Parliament and 'Manuvaad' is not the Constitution," he said.

The Modi government was "damaging" the credibility of educational institutes like JNU and imposing its own ideology and harassing the students for the crime which they did not commit, he said.

He also refuted the allegation that anti-India slogans were shouted on the JNU campus, in connection with which he had been arrested by Delhi Police on sedition charge.

"The Modi government committed a grave error in implicating me under sedition charge and used the media to project me as an anti-national and put me in jail," he said at a press conference after the speech.

Sedition charges do not imply anti-national activities, he added, asserting that he and others were striving to restore the autonomy of JNU at any cost. (More)

"We are committed to restore the social democracy in the country," the student leader said.

Attacking the economic policies of the NDA, he said only 0.5 per cent of the population was affluent and the government was spending a third of the funds on this section.

Where is Rs 15 lakh which Modi had promised would be deposited in everybody's bank account after black money stashed abroad was brought back, Kanhaiya asked.

There was a need "to change the attitude and not just dress", he said.

Autonomous institutions like FTII, Hyderabad Central University, JNU and NIT in Srinagar were being targeted to spread unrest among the students, Kanhaiya alleged.

Earlier, some Bajrang Dal activists threw stones at the vehicle carrying Kanhaiya Kumar after he arrived at the airport.

During his speech, an ABVP worker threw a chappal at him, but missed. The worker was handed over to the police, which also rounded up some others who tried to disrupt the speech.